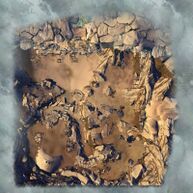 Defeat the Sons of Svanir in a frigid forest.

The first half of the fractal will have the players deal with extreme cold until the Elemental Source is terminated. This involves the following two effects:

Only the starting bonfire is lit, the rest need to be lit using the

Ignite special action skill received by approaching the large bonfire. As Warmth prevent stacks of cold from accumulating, it allows the players a short time to run out to collect firewood and defeat enemies.

The fractal starts you off in an alcove next to a bonfire that applies stacks of Warmth; this buff prevents the accumulation of the Hypothermia debuff, which would otherwise deal damage proportionate to the number of stacks.

Proceed forward to the large bonfire.

Use the Ignite special action skill to light the bonfire. The way forward is blocked by a wall of ice which needs to be melted by the bonfire. While the wall melts, Ice Elementals, Wolves, and Sons of Svanir will continually spawn. The Ice Elementals will run towards the fire to extinguish it; kill them before they reach the fire. Crowd control skills will be helpful here. Additional firewood bundles to stoke the fire will spawn periodically under the trees around the area.

At 75%/50%/25% the Elemental Source will send out projectile AoEs towards the fires, taking out 50% of the fire's health. If all fires are extinguished, a blizzard will be summoned which reduces visibility, and deals additional damage until a fire is lit once again. The fires will also run out of firewood over time. They may be resupplied with bundles found near each hut. The Elemental will also summon various Sons of Svanir throughout the fight. Stability and Reflects are very helpful against the Elemental Source and can be used to reflect the projectiles from the Sons of Svanir. Reflects may also be used to stop or slow the Elemental Source from depleting the fires.

Once the Elemental Source is defeated, any remaining Hypothermia your party has will be removed. Continue to the next area.

Grab a torch and navigate through the darkened forest toward the village. You will encounter two groups of the Sons of Svanir. It's easy to get lost, so make sure to check the footprints on the ground and follow them. If you find yourself getting too lost, head to the farthest right point on the map from where the elemental area is and hug it as much as you can, you will find the cave with the Legendary Shaman soon enough. With this method as well you can avoid the Svanir forces in the forest. Having a torch is a good idea as you are able to see your surroundings a bit better. Characters with other light sources can also have their surroundings lit without the torch. 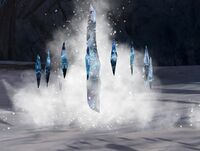 Corrupted Ice Crystals can be reflected and rallied off of.

If the group is separated initially by a wall appearing, interacting with the flaming banner will teleport you to fight.

The Shaman alternates between fighting in melee range and casting Ice Storm from out of range. Once the shaman is defeated the fractal is complete. Before leaving, don't forget to loot both the spawned chest as well as the shaman's.

The Shaman alternates between fighting in melee range and jumping out of the fight completely to cast Ice Storm from afar. When he is down among the party, the Shaman will use his greatsword to cleave the party. The shaman will apply Hypothermia as part of the auto-attack chain. If enough stacks are accumulated, the player will be frozen in a destroyable Ice Shard. The shaman will also summon several allies and three Corrupted Ice Crystals at the start of each melee phase which can provide him with Rime Shield. He will resummon these after each ranged phase. The projectiles of Corrupted Ice Crystals can be reflected. The Crystals have low health, so reflecting their projectiles will kill them quickly. They can also be rallied off of if a player goes down.

There are two main attacks of note:

If you are targeted by Icy Breath, it is advised to dodge back away in a straight line from the boss rather than run around the boss and risk damaging your allies. Also

Guardians can stop the Icy Breath by placing a Sanctuary on top of the shaman. If placed properly, the Sanctuary will not allow the ice breath to hit anyone outside of it. [verification requested]

At 75% and 50% health, the shaman will teleport out of range to the balcony, become invulnerable, and begin raining AoE ice spikes below. He summons several allies. The Elite Icebrood Effigy must be defeated to end this phase. The Effigy has a defiance bar and breaking it is recommended to quickly ending this phase. After this phase ends, the Shaman will summon more Corrupted Ice Crystals and more allies near the entrance to the cave.

At 25% health, he will use Become the Bear and remain transformed until defeated. This transformation is closer to Become the Wolf, giving him increased damage and leap abilities. Players should focus on not getting hit by his leap, as it is an extended knock down.

On arrival
Dessa: Reading subzero conditions in your area. And I'm registering something unusual coming from a nearby village. Be careful.

After Lornarr's death
Dessa Observation Mode: There, the fractal's stable. Let me know when you're ready to go. Statistically speaking, the next fractal must be warmer.

Fractals of the Mists
Retrieved from "https://wiki.guildwars2.com/index.php?title=Snowblind_Fractal&oldid=2339605"
Categories:
Hidden category: