Honor of the Waves (story) 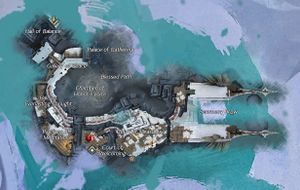 Honor of the Waves Map

The Kodan's sanctuary ship is under attack by Jormag's minions. Eir and Caithe are rushing to save it before it's too late.

— Description at the dungeon's entrance before completing story mode

Save the Voice from her pursuers.

On entering the dungeon, you will ascend a double staircase and pass through a door. Beyond this door lies a large open area with a giant corrupted ice shard in the middle. Immediately rush into the room and focus on attacking the shard.

After the ice shard fight, you will face a champion icebrood seer. As you go forward into the Gallery of Peace, you will see a bridge passing overhead and a staircase to your left. You will come under attack from trash mobs as you cross the bridge. After you cross, you will fight elite icebrood goliaths in addition to some weaker mobs. Enter the Chamber of Honor's voice.

After a brief cutscene, you will fight Kulag the Fallen. Kulag stands on an elevated platform that shields him from ranged attacks in some directions.

Return to the Gallery of Peace and cross the bridge. You will fight a champion icebrood goliath and two weaker mobs. Enter the Hall of Balance to trigger a cutscene and boss fight.

You will fight Hirvela in a room with two levels connected by a staircase. Players enter on the upper level, while Hirvela begins the fight on the lower level.

Descend a spiral staircase, pass the Contemplation Waypoint, and proceed down an icy tunnel to a larger chamber. Avoid the moving ice crystals on the floor and proceed to the far wall. Light the two braziers to begin melting the ice wall. Icebrood will spawn continuously until the wall is destroyed. The braziers may need to be occasionally re-lit.

The room beyond the ice wall has three rows of pillars. As you enter, you will be ambushed from beyond the third row by trash mobs and Lani Winterfist. Additionally, ice turrets in an adjoining room fire into the space between the second and third rows.

You will fight some turrets and weaker enemies in this area. Enter the Sanctum of Justice to trigger a cutscene leading to the final battle.

After the cutscene, Honor's Voice will go hostile. This boss is easily defeated, triggering a second cutscene and opening the door to the main fight. In the final battle, you will face two enemies on a platform above a pool of water. "The Huntsman" is a sword/warhorn ranger. His health bar at the top right of the screen is labeled "Kodan's Bane". "Bane's Teeth" is the Huntsman's pet.

Cinematic upon starting the dungeon:

Caithe: I am worried about Eir.

She seems grim. And she is taking too many risks. I cannot understand it.

Maybe she wants to atone for earlier failures.

That would be foolish. We have all failed in the past.

Ah, but you're not Eir. She holds herself to a higher standard.

She doesn't seem grim, only determined.

I'm sure her mood will improve once we find the Voice.

Eir Stegalkin: These icebrood are weak and pitiful. Jormag! Bring on your champions! I am ready to meet my fate.

This isn't the answer, Eir. Let me help you.

You are helping. Watch what happens here, and sing my legend at the council fires.

What about these kodan?

They are like us: natives of the north, driven south by Jormag's wrath. I have pledged to thelp them, as my own former allies care little for me.

Others care about you, Eir.

Yes, Caithe is here, though she does not understand. But I have failed the others too many times.

You're too hard on yourself.

The battle's not over yet.

Banish such dark thoughts from your mind!

You fate may not lie here. Let's find the Voice.

Honor's Claw: We must hurry. The Voice should be within her meditation chamber.

Who is the Voice?

Each of our sanctuary ships is ruled by a Voice and Claw. She is wisdom. I am strength.

Yes. The Voice communes with Koda. Over time, it drives the Voice mad. We must go help her.

Of course. Where are all the others?

Most have abandoned the sanctuary. Some have remained to protect it. I fear for their lives with these dragon minions and Svanir everywhere on board.

Have you fought the Sons of Svanir before?

Yes, though they are in greater numbers down here. They are people out of balance.

I agree. May I ask something else?

We share a hatred of them. Let us go.

I think you should be.

Jormag's servants cannot be helping her. We should go.

Thank you. I understand better now.

Why is the ship sinking?

Our people have been harried on our flight southward. Jormag's Champion has holed us, and we are now listing badly.

Will this ship sink?

Slowly, but it will. The lower decks are already underwater.

That's bad. May I ask something else?

Sounds like we have our work cut out for us.

Then let's press on and find her.

Honor's Claw: Forces of evil are everywhere on the ship.
Honor's Claw: I should be at the Voice's side. We must go to her chamber now.

Approaching a kodan body in the third room:

Honor's Claw: The wounds on that body. I didn't realize she had fallen so far.
Caithe: You're saying the Voice attacked other Kodan?
Honor's Claw: The Rage of Koda assails her mind. We must hurry.

Cinematic in the Voice's chamber:

Honor's Claw: This is the Voice's lair. Who are you?
Kulag the Fallen: I serve the hunter known as Kodan's Bane. Your precious Voice is our prey.
Kulag the Fallen: She can run all she wants, but we'll find her and turn her into one of Jormag's minions. Now die!

During the fight with Kulag:

Kulag the Fallen: Such a waste. How pathetic. (When casting Hoarfrost)

Talking to your allies after killing Kulag:

Caithe: The entire ship is crawling with Jormag's servants. We may be overmatched.

She feels useless. She courts death. How can I dissuade her?

With your actions. Help with her mission. You're not afraid of Jormag's minions, are you?

No. Eir and I have fought Jormag's champions before—and won. But she was more confident then.

She'll get more confident as she succeeds. Now, come on. Let's go.

Patience. She isn't ready to listen to you yet.

We've faced worse. I have faith in Eir.

Eir Stegalkin: Let us find the Voice. This may be my final conflict.

Why are you so sure this is your last fight?

My time has come and gone. I am not the warrior I once was. I have made mistakes.

You're still twice the warrior of most norn.

Think before you do anything rash.

Everyone makes mistakes. You just have to learn from them.

Your words have wisdom.

Thank you. May I ask something else?

We don't have time for such thoughts.

Can Jormag's servants corrupt the Voice?

I don't know. The powers of the dragon are limitless.

I hope she's all right. The Claw, too.

The Claw and the Voice are linked. Her madness saddens him. Her fear pains him.

We have to help them. Let me ask you something.

Then let's free her from her fear.

Then we need to find her first.

I'm sure it won't come to that.

Honor's Claw: The Voice has fled before her pursuers. She must be deep in the heart of the sanctuary.

How do you know that?

Voice and Claw are linked through Koda, I can feel her. She is frightened and in pai.

Poor thing. Where is she?

We must go to her.

Can Jormag's servants corrupt the Voice?

I do not know. I think they seek to strike at her in her weakened state and make her madness a weapon for them.

I hope she'll be all right. Have you fought the Sons of Svanir before?

Yes, though never before in such in great numbers.[sic] They are people out of balance—and must be destroyed.

I agree. May I ask something else?

Then we need to find her first.

Then, let's go. Into the depths of your ship!

Caithe: Do you have any idea what's going on her, Eir?
Caithe: Stop and assess the situation. That's what the old Eir would do.

Outside the chamber hallway:

Eir Stegalkin: One set of tracks splits off here.
Honor's Claw: Yes, but we must follow the Voice. Her pain calls to me.

Cinematic upon entering the Hall of Balance:

Eir Stegalkin: Another set of tracks. Why are they splitting up?
Honor's Claw: We must follow the Voice. She is this way.

Cinematic after defeating the Corrupted Voice:

Talking to your allies:

Caithe: Eir seems to be restored. Why did she not listen to me?

Sometimes you need to work things out for yourself. But she seems better now?

Yes. Less grim. Perhaps now we can gather the others together. She and Zojja need to work things out.

That would be best for them both.

Certainly, only ... why couldn't Eir have resolved this sooner? I may never truly understand other races.

I think your friends in Destiny's Edge would agree.

She had to walk her own path. Luckily, you were there to walk it with her.

Eir Stegalkin: Let us have our vengance against this Hunter of Jormag.

Are you all right?

I've been foolish. I let my own doubt cripple me. It doesn't matter if I always succeed. It only matters that I try.

Exactly. What you said to the Claw, that was true.

Yes, and I know it applies to myself as well as he. I didn't realize the folly of my own despair until I saw his.

Then let's end this and seek justice against Kodan's Bane.

I think your friends in Destiny's Edge would agree.

Honor's Claw: She is dead, and I am alone.

Are you all right?

No. But I take solace that she has been spared a worse fate as Jormag's beast.

That's true. Will the ship survive her passing?

It has been cruelly wounded, but we will salvage what we can find and build anew. Eir is right. We must get up again.

Your Voice would have wanted that.

We did our best. Mourn her death, but also celebrate her life.

I'll leave you to your memories.

During the encounter with the Huntsman:

Cinematic after defeating the Huntsman:

Honor's Claw: Voice is gone, but we must go on. I see that now.
Eir Stegalkin: Never let your mistakes defeat you.
Caithe: Eir, isn't that what I've been saying all along?
Eir Stegalkin: Yes, Caithe. But sometimes we have to learn that lesson for ourselves. Now we should find the others. We have a dragon to fight.

The Honor of the Waves dungeon is swarming with icebrood, but you can keep the Sanctuary afloat! Check your mail for more information.