This was originally charr land. The humans pushed us out and built Ascalon on top of it. Over two hundred years ago, we took our lands back. The human king, Adelbern, watched his soldiers panic as we breached the city gates. Facing certain defeat, the doomed king refused to surrender. Adelbern smashed his ancient blade Magdaer, and cursed Ascalon. The blast incinerated the attacking legions and turned the defending humans into vengeful spirits. The ghosts see the living as invaders. They show no mercy and no weariness—only blind hatred. Adelbern's hatred. 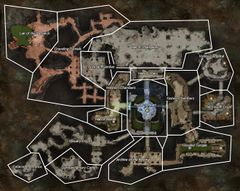 The Ascalonian Catacombs (abbreviated AC) are an underground network of tunnels and crypts within Ascalon. They have several levels, and were built over a gaping cavern connected to the Underworld. Thought to have been lost after the Searing cut off access, they are part of humanity's legacy in the region. Many spirits dwell in the catacombs, including trainers who lived during the time of the Searing. The spirits down there, though affected by the Foefire, are holding back gravelings, a long-forgotten native creature of the land that was forced into the depths centuries ago.

Completing this dungeon's explorable mode or its reward track awards Tales of Dungeon Delving which can be used to purchase the dungeon's armor and weapons from any Dungeon Merchant. 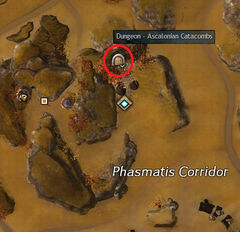 Location of the Ascalonian Catacombs entrance.

Eir Stegalkin, the norn hero, has gone into these ancient, ghost-haunted catacombs. Rytlock Brimstone wants you to go after her, before she stirs up King Adelbern's long-dead citizens.