The Zephyrites are a secluded, zen-like organization composed primarily of humans of Canthan or Elonian descent that live in a fleet of airships, the largest of them being the Zephyr Sanctum, that roam the skies of Tyria. Their magic incorporates power from the Aspects—three forms of air magic that are stored in crystals recovered from Glint's corpse in the Crystal Desert. 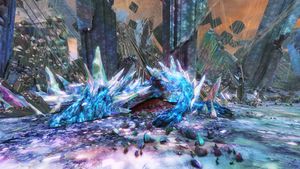 Generations prior to the Rising of Orr, the prophet Glint called the dwarven Brotherhood of the Dragon together and named them the protectors of her heritage, though what this refers to exactly is unclear. After the Transformation of the Dwarves in 1078 AE, this was no longer possible, and over time guardianship passed to the humans. When Glint was killed by the Elder Dragon Kralkatorrik in 1320 AE, her servants trekked to location of her corpse to prevent the magic imbued within it from falling into the wrong hands. It was there they found the Aspects, and with them they decided to build Zephyr Sanctum, where they could live above the clouds and study the Aspects in peace.

In the Sanctum and its fleet, the Zephyrites travel the world, looking to trade with different civilizations, as they have limited access to most materials and other items due to their living in the sky. However their mobility gives them access to exotic goods, so many groups both large and small seek to trade with them wherever they dock. For this reason, and the sporadic nature of their visits, many on the northern continent believed the Zephyr Sanctum to be a myth, and until recently no sylvari had ever set foot on it. Additionally, the neutral, peaceful environment aboard the Sanctum makes it an ideal location for political negotiations.

In 1326 AE, the Zephyrites landed in Labyrinthine Cliffs and signed a trade agreement with Lion's Arch after Captain Ellen Kiel's election.

In 1327 AE, the Zephyrites returned with new-found decorations from distant lands and decided to aid the now destroyed Lion's Arch, during the Festival of the Four Winds, by donating some supplies and also organizing some attractions and offering a portion of the income to the Lion's Arch relief fund. As shown in the Lion's Arch: Honored Guests living world instance. After this, they set off on what was to be a long journey west, however the Zephyr Sanctum was blown up by their recent convert, the sylvari Aerin, as they entered the skies above the Maguuma Wastes, leading four of their ships to crash into Dry Top. Many Zephryites and their guests survived the crash and built a makeshift refuge in the area. However, their leader, the Master of Peace, traveled on alone to protect something unknown since.

The Zephyrites are a pacifist multi-racial nomadic community. While most of their members are humans, particularly of Canthan and Elonian descent, they welcome anyone who has shared beliefs or the desire to learn their beliefs aboard. They also accept guests on their voyages. Their culture is heavily steeped in beliefs of peace, Glint, and the use of air magic via crystals. Due to their semi-secluded nature, they've grown cautious of those who are outside their communities and it is up to the Master of Peace to decide whether someone is worthy of joining them on a voyage.

The Zephyrites view protecting Glint and her legacy their most important charge in life, and seek to spread her teachings wherever they can. However, they remain very secretive about the nature of Glint and the crystals they grow, protecting their Aspects while still allowing outsiders limited access to them.

The specifics of their community's structure is unclear still, given their secretive nature. It is known that they are led by three Aspect Masters, one for each Aspect, and above them is the Master of Peace.

The Zephyrites don't seem to follow their races' common faiths, but instead appear to revere Glint herself. The extent of this reverence is unclear, however some Zephyrites mentioned praying to Glint during Aerin's attack on Zephyr Sanctum, asking Glint for a merciful end. There have been other mentions about how, when the Seraph rescued some stranded Zephyrites from the crash, that their "aspects aligned," giving an indication of a belief in a version of fate.

This is a stark contrast to their predecessors, the Brotherhood of the Dragon, as the Brotherhood followed Glint for practical, not spiritual, reasons and still revered the Great Dwarf like most dwarves, despite the claims of certain other dwarves.

Prayer for the Dead

The Sun shines on you no more. May you be at peace, free of the sufferings of this world.
May Glint find you in the darkness, and lead you into her perfect light. Until we meet again.