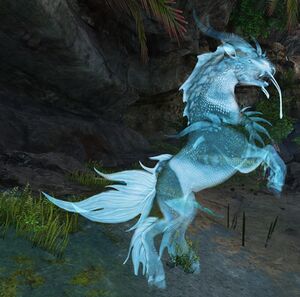 A kirin summoned by a Jade Sphere.

Kirin are naturally peaceful and magical creatures that live within the Echovald Wilds.

Kirin have horns with allegedly vast magical properties, as powder ground from kirin horns is believed to be able to strengthen the shells of siege turtles[1] and magic is thought to be able to be siphoned from kirin horns in order to create powerful weapons, though these theories have not yet been supported by evidence.[2] Kirin scales closely resemble the scales of fish in texture, and can be ground up into a powder that allows artists to create paintings that show the true soul of the subject painted.[3] They have the ability to heal their allies of injuries and cleanse nearby miasma.

Kirin appear to be, as a race, adapted to aquatic environments, though different regional varieties do exist. All known varieties of kirin possess barbels similar to those of koi. Kirin appear similarly to deer due to their body shape and hooves though kirin appear to have evolved fins growing off several of these appendages.