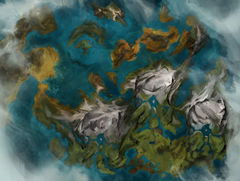 Map of The Mists

Before there were humans or dwarves, before there were even worlds or the stars that light the night sky, there was but one thing in the universe—the Mists. The Mists touch all things. They are what binds the universe together, past, present, and future. They are the source of all good and evil, of all matter and knowledge. It is said that all forms of life, no matter how simple or complex, can trace their origins back to this one place.

In the middle of the Mists is a spot where time moves neither forward nor back. It is a tear in the fabric of the cosmos, the point of perfect balance between all forces of the universe. This place is known as the Rift, and there is nothing to which it does not connect, nothing that cannot be reached from inside it. Those who have the know-how to travel across the universe through the Mists must pass through the Rift on their way to all other places. It is the center of all things.

In the center of the Rift, deep inside the Mists, stands the imposing walled fortress known across the multiverse as the Hall of Heroes. This structure is the pinnacle of the afterlife. When a hero dies, his spirit goes to one of two places: either it is buried with the deceased body, forever trapped inside the rotting flesh and rancid bones of the corpse, or it is released into the Rift. This latter honor goes to only those few whose deeds in life were legendary enough to be known across multiple worlds, and fewer still earn a place among the souls ensconced inside the Hall itself.

For a long while, the Rift and the Hall of Heroes were accessible only by those who had passed from the mortal world into the immaterial. It was the Land of the Dead, an exclusive club whose membership cost the blood of one's own life. But within the last century all that has changed.

The Mists is the oldest thing in existence, the proto-reality that exists between the worlds, constituting the fabric of time and space that connects the multiverse together. Everything that has, does, and will exist is made out of the Mists.[1]

The Mists serves as the setting for Player versus Player, and all players entering the Mists will be scaled up to level 80. 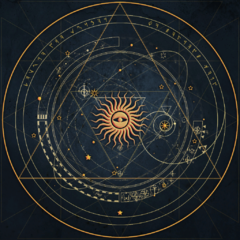 Lord Odran's map of the Mists, from the Durmand Priory's Special Collections.
Section-stub. This key section of the article is incomplete. You can help the Guild Wars 2 Wiki by expanding it.
Reason: Missing new information and story developments from Living World Season 4

Within the Mists are worlds (of which Tyria is just one), each with their own realities and histories, floating as islands in the ether. Humans are from one of these worlds, brought to Tyria by the Six.[2]

The Mists resonate from the worlds around them, forming bits of their own reality—islands of existence that reflect the histories of their worlds.[3] Some worlds are enormous, such as the Underworld, the home of the dead; others are simply residences for powerful spirits or deities. At the center of the Mists is the Rift, and within the Rift is the Hall of Heroes, the final resting place of powerful and virtuous souls.

The vast majority of the citizens of Tyria have no knowledge of the multiple worlds in the Mists. Mist Warriors will have some understanding of them, but very limited.[1]

The Mists are accessible only through portals, most of which are temporarily made by channeling the power of a force within the Mists, such as the havrouns calling upon the Spirits of the Wild. There are a few permanent portals as well—these portals were created by the mage Lord Odran, including The Portal in the Tomb of the Primeval Kings. Other known portals in the past included the Door of Komalie, the Mouth of Torment, and a portal on the Battle Isles; these four portals became inaccessible over the past 250 years due to the rise of the Elder Dragons.

Between 1320 AE and 1325 AE, five asura gates were built within Fort Marriner of Lion's Arch, replacing the Zaishen arena,[4] and becoming the only known fixed means of entering the Mists in Central Tyria. During Scarlet Briar's occupation of Lion's Arch, the Mist Portals temporarily resided in Vigil Keep, but were moved back to Lion's Arch when reconstruction efforts began. By 1330 AE the portals in both the Tomb of the Primeval Kings and the Mouth of Torment became active again, and a new portal to an unknown location in the Mists was opened in the Foundry from which the Forged army brought in reinforcements to the Domain of Vabbi. After Balthazar's defeat in Vabbi, Desmina had opened a new portal to the Underworld at Reaper's Gate, where the veil between Tyria and the Mists was already weak.

The World of Tyria
Retrieved from "https://wiki.guildwars2.com/index.php?title=The_Mists&oldid=1959770"
Categories: