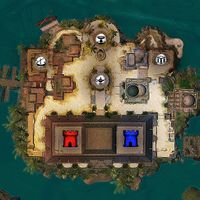 Djinn's Dominion is a structured PvP conquest map with three capture points. The map features the Yasmi's Favor as the secondary mechanic of the map.

Structured PvP
Heart of the Mists