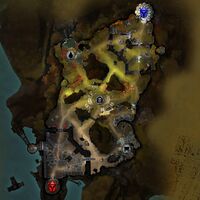 Map of Legacy of the Foefire

Legacy of the Foefire is a structured PvP map. It is called Memories of the Past on the map. It is a conquest map with three capture points and powerful NPC guards and guild lords as the secondary mechanic.

The map and objective are quite straightforward; unless either team decides to break into each other's keeps, it's usually best to stick to capturing and fighting for control of the capture points. Since both outer points are located on the opposite sides of the Graveyard, whichever team possesses better fighting ability can quickly gain the upper hand in battle. However, the deck is mixed when either side attacks the opposing keep. Two or even one capable player can take down either of the gates to the keep, along with all of the NPCs. If you know your keep is being sieged and there is nobody going to stop them, it's often a good idea to fall back and assault the besiegers before they can kill your lord, or at least before they can leave the fortress and flank your team.

NPC guards and 'guild lords' spawn at the beginning of each match in the starting zones of their respective team. In order to get to the guild lord, the enemy team has to take down a wall first. Walls can only be damaged by direct damage. Defeating the Lord grants 150 points. NPCs include: