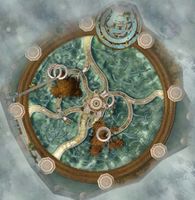 Map of The Sanctum

The Sanctum is the domain of the Goddess Kormir and part of the Realm of Torment.[1] It is a gigantic library containing the sum of all knowledge. In the wake of Kormir's departure, demons briefly invade the Sanctum and turn it into The Dark Library.

Upon Abaddon's demise and Kormir's ascension to replace him in 1075 AE, the Realm of Torment became Kormir's domain. To reflect being the Goddess of Truth, Kormir created the Sanctum as a grand library in the Realm of Torment where she and her Sanctum Librarians recorded knowledge of all kinds for centuries.

Following Kormir's departure from the Sanctum after the visit of the Pact Commander's party in 1330 AE, demons seeped in from other parts of the Mists and turned the now defenseless Sanctum into the Dark Library while devouring several spirits during their attack. The Commander briefly visited the Dark Library and slew several powerful demons while searching for keys with which to open locked chests containing the Writings of the Last Spearmarshal.

The Dark Library was eventually reclaimed from demons and restored as the Sanctum. It became a safe haven for spirits who sought shelter from the Elder Dragon Kralkatorrik's invasion of the Mists in 1331 AE.[2]

Players who don't have Divine Passage will not see the the Portal but can join instances that party members open - both entering and leaving have the same messages as home instances.

Approaching Nenah
Nenah: I can't believe the gods would just abandon us.
Nenah: Well, I guess what's done is done. It is what it is. Life goes on.

Leaving the secret room
Nenah: Good luck out there.
Nenah: You won't be forgotten.