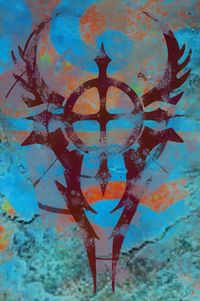 The Zaishen Order is a guild that holds tournaments to honor and protect holy places. Once holding sway over the Battle Isles, they protect Tyria against forces of darkness. In the past, the Zaishen were a human order which followed Balthazar, the God of Fire and War. Since the rise of the Elder Dragon Zhaitan, however, the order has accepted other races in its ranks and now honors an aspect of each of the member races' belief about what represents strength in combat such as Bear, the charr heroes, the Eternal Alchemy's role in chaos and strife, and the sylvari's dreams of chivalry and courage.[1]

The Zaishen were originally a human order which followed the teachings of Balthazar, the God of Fire and War. The Zaishen Antheneum was dedicated to the order in Orr until Orr sank in the Cataclysm. During the events of Guild Wars, the Zaishen Order was one of the largest guilds in the world and held sway over the Battle Isles, guild halls, and protected Tyria against forces of darkness. One of the order's most notable duties in the Crystal Desert was to defend the Portal in the Tomb of the Primeval Kings.[2]

Since the Elder Dragon Zhaitan's awakening and the sinking of the Battle Isles which followed the Rising of Orr in 1219 AE, the Zaishen lost both their old base and contact with Cantha which used to support them. The order began accepting other races in its ranks, and by 1325 AE its members also included asura, charr, norn, and sylvari.[3]

Members of the multiracial branch of the Zaishen Order appeared in Lion's Arch and were situated in Fort Marriner where they were seen taking part in combat training. They offered their help during the karka invasion of the city. However, the Zaishen vanished after Scarlet Briar's assault on Lion's Arch in 1326 AE.

After Balthazar's return to Tyria, many human members of the Zaishen Order joined his campaign in the Crystal Desert alongside the Forged army and the more fanatical members of Balthazar's priesthood in 1330 AE. The Zaishen attempted to convert the locals to the God of War's cause with their zealous preachings around the Free City of Amnoon, following the instructions of the Herald of Balthazar. While some Zaishen even took part in Forged raids in the region to gather supplies for the war effort, others in the order were less belligerent and were willing to share some details of their god's campaign with the priesthood of Kormir.[4][5][6] Ley-line energy released from the deaths of the Elder Dragons Zhaitan and Mordremoth made one of the Zaishen ghosts in the Desert Highlands go crazy.[2]

Following Balthazar's demise in the Battle of Kodash Bazaar, many of the surviving human members of the Zaishen Order disappeared. Some of them accompanied Zafirah, a surviving priestess of Balthazar, to Thunderhead Keep where they assisted the Pact and its Elonian allies in the battle against the Elder Dragon Kralkatorrik in 1332 AE. Some of them would later join the Order of the Crystal Bloom, revering the dragon Aurene, as Balthazar's teachings and potential would live on in her after she had devoured his magic.[7][8]

In 1335 AE, Spearmarshal Zaeim, Zafirah, and many Elonian Zaishen were present on the Sandswept Isles when they noticed the Void horde launching an invasion of Elona and the rest of the world. Zafirah rallied the Zaishen to her, and they battled the Void alongside Rox and the Olmakhan until the horde dissipated following Aurene and the Pact Commander's victory over the Dragonvoid in Dragon's End.[9]