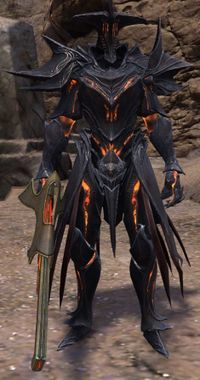 Take pride in your work; bring souls before your master that they might be Forged in his image.

The Forged are a recently appearing army that is scouring the Crystal Desert and Elona in service to Balthazar, the God of War and Fire. They are constructs of living metal and fire imbued with souls of the dead.

The metal which the Forged are made out of is specially treated to withstand heat and fire. Without the elemental and fire magic that binds souls to the construct, they appear as normal suits of armor.[1]

Those turned into Forged retain their memories and personalities, but lose their free will and are forced to revere Balthazar although they are able to voice their concerns.[2][3][4] Those who attempt to resist the indoctrination are subjected to prolonged, agonizing pain which only becomes bearable if they surrender to the war god's will.[5]

Following his failed attempt at killing the Elder Dragons Primordus and Jormag in 1329 AE, the war god Balthazar set his sights on the only viable Elder Dragon left: Kralkatorrik who was residing in the Crystal Desert. Knowing that he would need a bigger army than mercenaries and faithful mortal followers like the Zaishen Order and the Church of Balthazar to take on the Elder Crystal Dragon, Balthazar traveled to the United Kingdom of Elona and negotiated a mutually beneficial deal with King Palawa Joko. In exchange for Joko assisting him in assembling his army, the former god would reward Joko with a share of these new recruits.

Balthazar and Joko located and raided the long fallen city of Kesho to learn the ritual that the Forgotten had used to create the Exalted. Balthazar modified this ritual to create the Forged, having experimented on the Exalted of Kesho to learn the magic and create the first functioning prototypes for his army.[6] After the raid on Kesho and their first successful experiments, Joko helped Balthazar access the Domain of the Lost for the souls of those who had suffered traumatic deaths, only to be betrayed and imprisoned by the former god who no longer required the lich king's services.[7]

The first group of Forged were created out of the Eternal Army that served Balthazar in the Fissure of Woe after their deaths as warriors and fighters. However, to bolster their number, the Forged began mercilessly attacking the inhabitants of the Crystal Desert and Elona, and took the souls of the victims out of the Domain of the Lost. The Forged had similarly created portals into the Realm of Torment at the Ruptured Heart in the Desolation to further bolster their numbers and brought in more reinforcements via a portal they had set up in the Foundry in the Domain of Vabbi. The fanatical human members of the Zaishen Order joined the Forged willingly, recruited Elonian refugees,[8] and performed the rituals that turned souls into new Forged.[9][10]

As their army grew with new recruits, the Forged began a campaign to take down Kralkatorrik. To accomplish this goal, they began hunting down the dragon Vlast and the Dragonsblood Spear which could hurt the Elder Dragon, constructed the Warbeast, sent troops south to Elona to prepare for the siege on Kralkatorrik and Joko's Awakened forces which resisted their advance, and raided settlements and caravans for supplies for the war effort while keeping any who would try to stop Balthazar from hindering his conquest.[2]

In 1330 AE, the Forged launched a full-scale assault on Kodash Bazaar where Kralkatorrik was last seen in and fought against Awakened, Branded and members of Dragon's Watch. After Balthazar and his Warbeast had been defeated atop Joko's Sky Garden and Kralkatorrik had flown away, the leaderless Forged fell under attack by the emboldened Awakened who mopped up the remaining Forged while reclaiming the regions they had lost to the war god's army earlier.[11] By 1331 AE, it was unknown if any Forged survived.