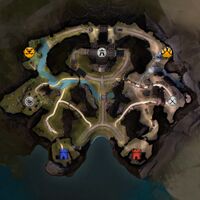 Map of Forest of Niflhel

Forest of Niflhel is a structured PvP map. It is a conquest map with three capture points and powerful NPC creatures as the secondary mechanic.

There are 2 powerful NPC creatures that grant unique buffs and 25 score points if killed. They spawn for the first time 1 minute after a match has started and when killed after 3 minutes.