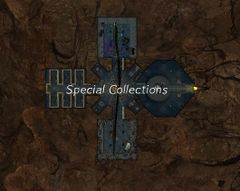 The Special Collections is a hidden area in the Durmand Priory that serves as a storage and research area with a continually changing access cipher to ensure the highest level of security. It is accessed through the kitchen in the lower level of the Durmand Priory; Chef Robertus acts as gatekeeper, adjusting the wards on the portal (fireplace) to allow admittance to authorized individuals.

A bronze Statue of Abaddon stands at the entrance to the area, surrounded by 3 tablets and stairs on each side and Lord Odran's map of The Mists depicted on the ceiling. Around the edge of the map, the phrase "Beware the dangers of secrets kept" is written in Ascalonian runes. The stairs lead into the next room, which contains a circular arrangement of bookshelf stacks. To the south (on the left when standing behind the statue of Abaddon) is a large storage area. After passing through to the west of the circular stacks, additional bookshelves are arranged in six two-story alcoves (three on the north and three on the south). An area to the north (on the right when standing behind the statue of Abaddon) is closed shut by a gate; with a sign "Autopsy Lab, Do not enter", written in New Krytan. Suspended from the ceiling in the main room is one of Zhaitan's tails, preserved for further study. And on the ceiling itself is a map of The All.

Upon solving the security cipher, the circular stacks rotate so that their openings align (forming a direct route from the statue to the alcoves). As the stacks lower, retracting into the floor, the medallion at the center of the circle retracts in a spiral, forming stairs down to the lower level of the Special Collections, which consists of an additional, larger, storeroom.