This article is about the historical figure. For the statue, see Snaff (statue).
Spoiler alert: The following text contains spoilers relating to Living World Season 4. 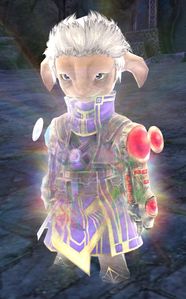 She will outlive me, as she should. She will face horrors that I will not. And in those moments, I hope she remembers my strength, not my weakness.

Master Snaff was an asuran golemancer and the mentor to both Zojja and Kudu. He joined Destiny's Edge and fought alongside his fellow guild mates and Glint against the Elder Dragon Kralkatorrik in the Crystal Desert, losing his life in the attempt. Snaff's death led to the breaking of Destiny's Edge, and his genius would be honored among the asura of Rata Sum who dedicated the Snaff Prize and Snaff Memorial Lab to him.

Snaff was a highly regarded magical theorist and inventor even among the intellectual asura. He wrote a textbook on comparative golemantic theory.[1] He specialized in the creation of enormous combat golems, but many of his smaller inventions focused on using telepathic control instead of machinery. Rumors in Rata Sum suggest that Snaff lost control of his golems once.[2]

In his later years, the golemancer took the promising young genius Kudu as his apprentice. His research led Kudu into major discoveries about dragon energies, particularly that Elder Dragons each exuded their own energies with unique magical signatures. Snaff discontinued this research because it was too dangerous, but Kudu picked it up again as part of the Inquest after parting ways with his disagreeing mentor. Disheartened by his apprentice's evil ambitions, Snaff nevertheless decided to take in another apprentice, Zojja.

Section-stub. This key section of the article is incomplete. You can help the Guild Wars 2 Wiki by expanding it.
Reason: Expand biography with events from Edge of Destiny. 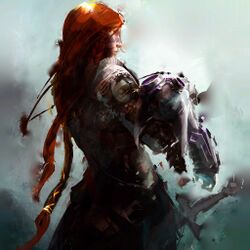 Snaff joined Zojja, Eir Stegalkin and Garm in an adventuring guild called Dragonspawn's Destiny. With Eir's help, he built a special golem he named Sandy. Their group met another guild called Edge of Steel in Lion's Arch. The trio convinced the members of this other guild, which included the sylvari Caithe, the human Logan Thackeray and the charr Rytlock Brimstone, to join forces with them to take down the Dragonspawn, the Elder Dragon Jormag's dragon champion which was terrorizing the Shiverpeak Mountains. The two guilds eventually defeated the Dragonspawn and decided to form one guild, choosing the name Destiny's Edge by combining their former guilds' names.

Destiny's Edge faced many dangerous dragon champions in the following months and became famous throughout Tyria for their heroic deeds. During this time Snaff's fellow guild mates helped him develop and hone his already impressive talents even more.

In 1320 AE, Grand Duchess Faolain of the Nightmare Court sought out Caithe and, in an attempt to sway her to her side, informed her that the previous struggles of Destiny's Edge against dragon champions had amounted to nothing as the Elder Dragons would continue to rise. According to Faolain, the Nightmare Court had learned that the dragon Glint had kept her loyalties concealed and was preparing for the rise of the Elder Dragon Kralkatorrik as his champion. Caithe delivered the troubling news to her companions in Destiny's Edge who were torn about the reveal as they did not trust Faolain and were aware of Glint's actions against the enemies to Tyria in the past. Despite their initial misgivings about Glint's suggested treachery, however, Destiny's Edge resolved to seek out Glint's lair in the Crystal Desert and had the blessing of Queen Jennah, who was equally torn about the decision, to stop Glint before the dragon could help her master return to the world.[3]

The guild wandered around the Crystal Desert fruitlessly in search of Glint's Lair. Sandy's design was what finally made Snaff realize that the old tale about Glint hiding her lair in a single grain of sand was simply not true—Glint's sanctum, like Sandy, was actually in all of them. Once this was realized, the cloaking magic protecting the lair eroded and let the guild confront the dragon.

Glint ended the guild's attempted assault quickly and revealed that she was not serving the Elder Dragons but opposed them, particularly her former master Kralkatorrik. Destiny's Edge realized their error and decided to offer their services to Glint, devising a plan to defeat the Elder Dragon with their combined strength and cunning as well as a select few powerful artifacts found in Glint's lair: the Dragonsblood Spear and Kralkatorrik's crystallized blood which Snaff used to devise a harness allowing him to enter the Elder Dragon's mind. Being ever boastful, Snaff believed he would be able to match wits with Kralkatorrik and prove superior.

In the final battle against Kralkatorrik in the Crystal Desert, Snaff grappled with the mind of the Elder Dragon directly; he was even able to successfully control Kralkatorrik for a time after Glint had sacrificed herself to distract the Elder Dragon at a pivotal moment. Upon realizing the threat the golemancer posed, however, Kralkatorrik's sent his Branded minions after Snaff, and they broke through the golem Big Snaff to get to the elderly asura during the mental battle. Because Snaff was poorly defended due to Logan's sudden departure to aid Queen Jennah in the Ogre Revolt, the Branded ultimately succeeded in killing the golemancer, and Kralkatorrik took up flight before the remaining members of Destiny's Edge could defeat him. Destiny's Edge broke out in arguments out of anger, grief and guilt over what had happened, and dissolved soon afterward.

Following his demise, Snaff became regarded as a major hero. The asura dedicated the Snaff Memorial Lab to him, the highest honor that the asura bestow on anyone. The Snaff Prize, an award for winning the annual asuran competition of the most revolutionary invention of a given year, was held in Snaff's memory since. Wishing to honor her guild mate, Eir carved a statue in Snaff's likeness which visitors can marvel at in Stonewright's Steading to this day.

At some point following his death, Snaff met with the ghost of Glint in the Mists and learned of her prophecy involving her second scion Aurene and the scion's champion. When Kralkatorrik invaded the Mists with new abilities gained from consuming the former god Balthazar's magic in 1331 AE, Snaff joined Glint's army of ghosts who were fighting against the Elder Dragon's Branded army.

When the Branded began breaching into Elona via Mist rifts opened by the Branded Riftstalkers, Glint held them off while sending the ghosts of Snaff and Eir, who had died a few years prior in the campaign against the Elder Dragon Mordremoth, to assist in the sealing of the rift in Sun's Refuge. Snaff enjoyed fighting once more and delivered inspiring speeches to everyone present to motivate them much to Eir's amusement.

After the battle in the refuge, Snaff and Eir informed Aurene's champion, the Pact Commander, that they could not stay for long. They delivered a dire message from Glint: Kralkatorrik had begun consuming the magical energy in the Mists, and Aurene and the Commander needed to enter the Mists to stop the Elder Dragon and have Aurene replace him according to Glint's prophecy before reality itself would be devoured. While hurrying to Aurene, Snaff conversed with the asura progeny Taimi, whom he recognized as Zojja's apprentice, and told her that he had heard great things about her.

Once they reached Aurene, Eir and Snaff urged the scion to enter the Mists to confront Kralkatorrik. When the Commander protested that Aurene was not ready for such a difficult task all by herself, Snaff gently remarked that the Commander's fate was entwined with the scion in the prophecy and that Aurene's brother, Vlast, had failed because he had not had a champion like the Commander by his side.

Backed into a corner, Aurene revealed a vision to the people present. She showed multiple potential scenarios of their future attempts to defeat Kralkatorrik with varying equipment and allies—including the Pact fleet, the MEGA-LIT cannon, Awakened trebuchets and soldiers, Braham, Caithe, Canach, Rox, Rytlock, Taimi in Scruffy, and an enigmatic deadeye priestess who would later be revealed as Zafirah—only for each outcome to end in Aurene's death. Terrified, the scion roared in anguish and fled outside, leaving her allies reeling without her, while the ghosts of Eir and Snaff vanished back into the Mists.