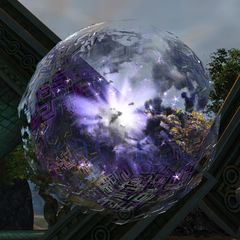 The Infinity Ball is a device designed potentially by the asura player character in order to get into the chosen asuran college. It is designed to produce possible results of what will happen in the future - possible, as the future is ever changing. The device ultimately failed due to not having enough power to generate accurate enough results.

Shodd finds the blueprints for the device and approaches the player character about improving it; at the same time, Zojja requests to alter the blueprints for her own purposes. Agreeing to both, the Infinity Ball is given more power, resulting in the creation of a one-way portal into the future. In the third attempt to produce enough energy, a Mysterious Stranger, the player character's future self, and Grand Vice Admiral Shodd, Shodd's future self, appear through and reveal the nature of the Steam creatures as the Mysterious Stranger's own invention, before being killed and the Infinity Ball sealed away again.