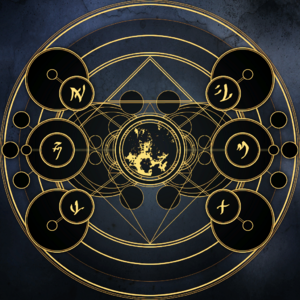 Design of the All by the Durmand Priory. In New Krytan stylized form:

The All, also referred to as the Antikytheria[1], is a symbolic representation of the world of Tyria as a machine with various moving parts. Those who have seen it describe it synonymously with the Eternal Alchemy.[1][2][3]

The All is depicted as a grand mechanism moving around a central body. Some, including Scarlet Briar and the Pact Commander, have interpreted this central body to be the Pale Tree,[2][4] although it is more commonly interpreted to be Tyria itself.[1] Orbiting this central body are six large bodies (interpreted as the Elder Dragons or spirit realms), existing in primal symbiosis. The energies are in continuous push-and-pull motion, perfectly balancing themselves to each other and the world. According to the Apostate the world will tilt and all beings will fall off it into the void if the energies become imbalanced.[1]

The Durmand Priory has a representation of the All on the ceiling of its Special Collections, which explicitly links the Elder Dragons to the six bodies by placing the first letter of each of their names next to each body. This version also depicts other circles, representing spheres of influence and powerful magic.[3] These circles are of various sizes, some smaller than the Elder Dragons, some larger, some overlapping, some interlocking, and some branching off others. In this depiction, the central body is a circular map of the northern continent, and other than the map and the New Krytan lettering, the design is vertically symmetric.

According to Ogden Stonehealer, the All is undefinable as beings can only grasp portions of it, and even the Elder Dragons are small relative to the All. Beings can only see certain layers of the Mists, the Elders, and Tyria while anything beyond that is hidden from their senses.[3] 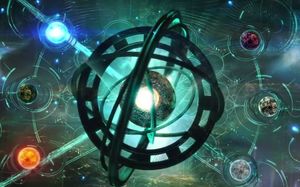 The All as depicted during The Machine.

The All (called the Antikytheria) was studied by the Apostate, one of Abaddon's Margonite servants who later abandoned his adherence to Abaddon, at such a time that ancient Krytan was in use.[1]

Study of the Antikytheria may go back further still, to a time when the jotun studied the skies with their Mystic Telescope. According to Rising Stars, a translation of an ancient jotun writing, the Elder Dragons represent a force much larger than their material form would suggest. Their awakening moves the Antikytheria, which in turn has tangible effects. The translator concludes that the jotun were implying that the constellations themselves are altered by awakening of Elder Dragons. Something similar was said of the Six in 1075 AE by Bahltek, specifically, "The gods can be seen in the heavens... to varying degrees. They've emblazoned their marks upon the firmament, and these marks are not constant".

Sometime between 1322 and 1323 AE, the sylvari Ceara entered Omadd's Machine, a device purpose-built by Headmaster Omadd of the asuran College of Synergetics to see the Eternal Alchemy itself, only to witness the Antikythera mechanism instead. This experience led to the rapid decline of her sanity, opening her mind to Mordremoth and turning her into Scarlet Briar.[2][5][6]

In 1327 AE (two years after the death of Zhaitan) the Pact Commander, in pursuit of Ceara (now going by the name Scarlet Briar), accidentally activated Omadd's Machine and had a vision of the All. The vision showed six orbs of various colors fixed in the same arrangement as the Durmand Priory's depiction of the All. One by one, each of the orbs lit up and came loose from their fixtures, beginning to orbit the central body. The order in which they activated were: red, blue, white, dark green, purple, lime green, which has led to the belief that this represents the order of awakening of the Elder Dragons. At the end of the vision, the orb that would represent Zhaitan stopped abruptly and crashed into the central body, turning it the color of Zhaitan's orb and spreading its influence throughout the rest of the All while a dragon's growl was heard. In this vision of the All, the vertical symmetry described above was expressed as the trunk of the Pale Tree.[4] 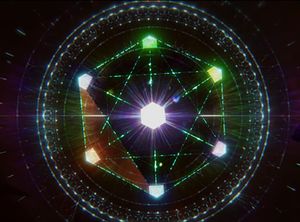 The All as depicted during The Way Forward.

In 1330 AE, two years after the death of Mordremoth, the progeny Taimi discovered that each Elder Dragon had a unique weakness and the Jormag and Primordus' weaknesses were each other. She adapted Omadd's Machine into a machine of her own, designed to access the energies of the All and use Jormag and Primordus' energies against each other with the goal of destroying both. Using Rata Novan simulation technology, she ran a simulation on what would actually happen if she had managed to use the energies of two Elder Dragons against each other to kill both at once.

In the simulation, the All was depicted in a similar way to in Omadd's Machine, with six orbs fixed around a central mechanism. Each of these orbs have concentric ellipses spinning around them, although the ellipses spinning around the orbs that would presumably represent Zhaitan and Mordremoth were spinning noticeably slower. The orbs representing Primordus and Jormag activated and moved to the forefront, rapidly spinning around one another and exchanging lightning-like energy. The exchange grew in intensity until the two orbs grew close together, and then the exchange of energy abruptly broke off and both orbs went inert. In the simulation's background, the All had stopped completely, the central mechanism completely stationary. After a short time, the components of the All reactivated and began moving again, this time more rapidly than before, with the orbs spinning around the All in wider and faster orbits, until the central body exploded in a white light.[7]

Section-stub. This key section of the article is incomplete. You can help the Guild Wars 2 Wiki by expanding it.
Reason: Missing information from The Way Forward