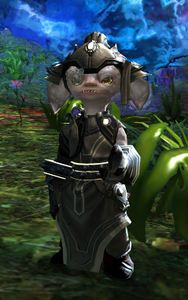 I can do anything I want. And here, as in my world, the only obstacle to my transcendence is you. To become all that I am capable of becoming, you must die. It's my destiny...and my pleasure.

The Mysterious Stranger, also known as the Grand High Sovereign, is the ostensibly alternate reality version of the Snaff Savant who came out of the portal created by the Infinity Ball. This version of the Savant had gone evil and conquered Tyria with their creations, the steam creatures. Ultimately the Sovereign and their ally, Grand Vice Admiral Shodd, were defeated by the Snaff Savant, Shodd, and Zojja as soon as they appeared in 1325 AE, ending the threat before it could spread.