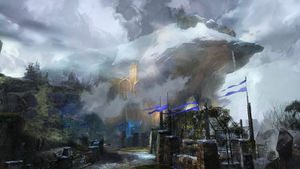 Gather supply to hire soldiers. Battle for control of heroes. Man the trebuchet to defend your stronghold, and storm the enemy gates to defeat the guild lord!

The objective of the game mode is to find and kill the enemy's Lord in their stronghold and, along the way, fight for and gather supplies.[1]

Note: the lords are often out of combat even while under attack causing overtime not to trigger in many cases when it should

Mist essence appears during matches and can be used to summon powerful mist champions to help teams.

The trebuchets are used to deal large amounts of area damage and remove stability. Each team has a trebuchet and they can be rebuilt with supply once destroyed.