From Guild Wars 2 Wiki
Jump to navigationJump to search
Stub. Key elements of this location article are incomplete. You can help the Guild Wars 2 Wiki by expanding it.
Reason: Lore could be expanded. 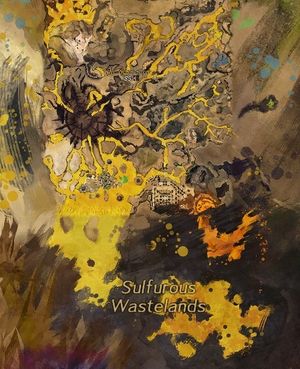 Map of the Sulfurous Wastelands.

The Sulfurous Wastelands, interchangeably called The Desolation, lies in northwestern Elona. In ancient times it was the shoreline for the Crystal Sea, described as a beautiful and verdant land. It was dried up and turned into a wasteland with the defeat of Abaddon in Year 0. Over the next millennia, Abaddon's influence spread from the Mouth of Torment, turning the land toxic with sulfurous sands which the region now gets its name from.[1] Since Abaddon's death in 1075 AE, the toxicity of the sands have lessened though they are still deadly.[2]

The Sulfurous Wastelands house the seat of Palawa Joko's empire, the Bone Palace.

The World of Tyria
Retrieved from "https://wiki.guildwars2.com/index.php?title=Sulfurous_Wastelands&oldid=2190918"
Categories: