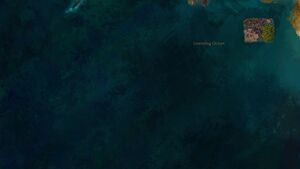 Partial map of the Unending Ocean.

My apprentice and I came from the ocean deeps. I wouldn't advise you go there. You're not ready for the horrors of that place.

The Unending Ocean is the collective name of all of Tyria's major bodies of water. It contains various seas and bays, such as the bay surrounding Lion's Arch, and Janthir Bay. When Tyrians refer to the Unending Ocean, they typically refer to the large body of water—alternatively called the clashing seas[1] and the Great Sea[2]—south of the Sea of Sorrows separating the Tyrian continent from Cantha.

Between the northwest coast of Cantha and the southern rim of Elona, a deadly sea is troubled by sudden storms and cyclones, hidden reefs, and dangerous sea creatures. These waters were once navigated by fearless Luxon raiders from Cantha, and at least until the rise of the Elder Dragons, brigands from many cultures searched for secret coves hidden by these deadly waters.[3] The Unending Ocean is home to thousands of aquatic species.[4]

At an unknown point in time after the previous rise of the Elder Dragons, the Six Human Gods brought humans from the Mists to the world of Tyria before transporting them elsewhere while the gods turned Orr habitable.[6] Humans would eventually spread across the globe, sailing to the continents of Cantha, Elona, and Tyria on multiple occasions over the centuries and eventually settling Orr as well with the earliest known recorded historical date on human settlement being Cantha in 786 BE.[7] The Kurzicks and Luxons sailed to Cantha later under unclear circumstances, and Luxon legends refer to a distant homeland across the Unending Ocean.[8]

Thousands of aquatic species of varying intelligence resided within the Unending Ocean during this era,[4] including the karka,[9] krait,[10][11] largos,[12] and quaggans.[13] Most of them did not appear in shallow waters at the time, so humans remained unaware of their existence at first.

Over a thousand years ago, the human Margonites were said to have ruled the Unending Ocean until they lost their humanity, though they were centralized around the Crystal Sea and Elona's shores.[14] The Five True Gods' battle against the rogue god Abaddon and his Margonites led to the Crystal Sea boiling away and turning into the Crystal Desert, connecting the Tyrian continent with Elona in 1 BE.[7][15] 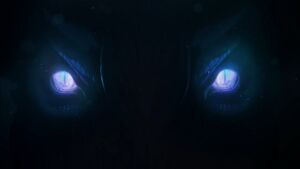 Soo-Won, the Elder Dragon of Water, awakens in the depths of the Unending Ocean.

Circa 200 years ago,[16] Soo-Won, the Elder Dragon of Water, awoke in the deepest parts of the Unending Ocean. According to the saltspray dragon Kuunavang, all those of the sea—whether she meant the Jade Sea or the entire Unending Ocean—felt the Water Dragon's rise as it was a presence powerful enough to drive back the shadows in the depths.[17] According to the Durmand Priory's theories and testimonies from quaggans, the deep sea dragon seemed to have begun forcing the aquatic species out of their homelands and into Central Tyria.[18][19][20] The krait fled through the domain ruled by the southern quaggan kingdom, and the krait slaughtered or enslaved any quaggan they came across. Quaggan tales claim that the krait seemingly slew the quaggan goddess Mellaggan,[21] and either slaughtered, ate, or enslaved the markissios and the rest of the quaggan royal family.[13]

Following an ancient doctrine interpreted by their oratuss priest caste, the krait based their religion on massive obelisks of a unique, dark stone that could be found exclusively and rarely on Tyria's ocean floors. They came to believe that each of these obelisks was raised upon the site of a krait prophet's ascension into a mystic world, a world beyond Tyria, where these nameless abyssal prophets would be building an army great enough to eradicate all other species. The krait expected the prophets to return and drown the surface of Tyria beneath one massive sea one day, and they began sacrificing slaves to show reverence to the prophets and to ensure that the prophets would have servants in their mystical "other world." Krait legends state that all the races living above water were driven out of the sea by the prophets and forbidden to return.[22]

The Battle Isles were once located in the Unending Ocean between Tyria and Cantha, acting as a natural resting point for human naval routes between Cantha, Elona, Central Tyria, and beyond, although these routes were sometimes waylaid by the krait. Although Emperor Usoku had pushed for isolationist policies in Cantha by 1127 AE,[23] the Empire of the Dragon and the Kingdom of Kryta continued trading regularly decades later.[24]

The Elder Dragon Zhaitan awoke and caused the Rising of Orr which created the Great Tsunami, flooding surrounding coastal areas in 1219 AE. The Battle Isles sank beneath the waves, and areas such as the D'Alessio Seaboard, Sanctum Cay and the port city of Lion's Arch were flooded as well, destroying the latter.[23] The Great Tsunami affected areas all the way south to Dajkah, flooding the Olmakhan village of Atholma with many casualties and forcing the charr tribe to rebuild their home on the Sandswept Isles.[25] It was during this time that many tengu around the world migrated to Sanctum Cay, founding the Dominion of Winds as they sought a safe haven from the Great Tsunami.[26]

Displaced corsairs and pirates eventually settled into the remains of Lion's Arch in Kryta and rebuilt the ruined port city into a pirate haven which would earn its independence from Kryta during the Great Krytan Blockade in 1256 AE. The Risen used sunken corsair vessels to build a fleet of Dead Ships which would patrol between Orr and the Ring of Fire, making naval travel between the Sea of Sorrows and the Unending Ocean nigh impossible. The existence of sporadic Canthan sailors washing upon the Tarnished Coast since the Rising of Orr suggested that Canthans still sailed the Unending Ocean despite the risks.[23] Some largos had extensive knowledge of Orr,[29] implying that they lived relatively close, which would place them in the northern Clashing Seas. If so, then the encroaching influence from the ocean's dark depths, which scholarly theories had attributed to the deep sea dragon, had reached these waters. 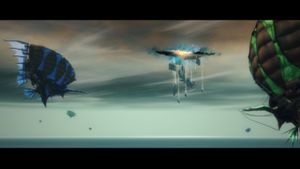 Kralkatorrik and islands from the Mists fall into the Unending Ocean, creating Dragonfall.

Following a battle in the Mists in 1332 AE, the Elder Dragon Kralkatorrik lost one of his wings and fell from a rift, which the dragon Aurene had created, into the sea south of Orr alongside chunks of the realms of the gods. The impact created a new landmass called Dragonfall which was comprised of Kralkatorrik's body trapped under chunks of land from portions of Balthazar's Fissure of Woe, Grenth's Underworld and Melandru's domain. Various denizens of the god realms, ranging from nature spirits to the undead and the Shadow Army, went berserk and attacked both Kralkatorrik's Branded minions, which had arrived to defend their wounded master, as well as the Pact's armed forces and the Mist Wardens, which had arrived to finish the battle with the Elder Dragon. After Kralkatorrik's demise, his lifeless body and the chunks from the god realms remained as an island on the Unending Ocean while the god realms' spiritual inhabitants, who had been pulled from the Mists, continued fighting against anything encroaching on their domain.

As Cantha opened its borders to the outside world in 1335 AE, Magister Ela Makkay visited the continent and learned about Soo-Won stopping the Great Wave. The legend contradicted earlier Priory theories about Soo-Won possibly being the cause of the eruption of many underwater races to Central Tyria. A new, more troubling theory arose from Ela's investigations: the aquatic races were only driven away from the Unending Ocean's depths after Soo-Won had migrated to Cantha, suggesting that some other heretofore unknown force may have been behind it and how Soo-Won's presence had originally kept them at bay.[17][18][30]

The World of Tyria
Retrieved from "https://wiki.guildwars2.com/index.php?title=Unending_Ocean&oldid=2617745"
Categories: