Raid on the Capricorn

Raid on the Capricorn 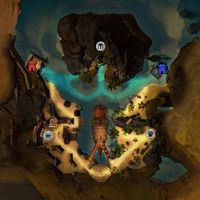 Map of Raid on the Capricorn

Raid on the Capricorn was a structured PvP map that was removed from the map list with the April 15, 2014 game update. It was a conquest map with three capture points and powerful NPC creatures as the secondary mechanic.

Much of this map is covered in water, and thus underwater mode combat is necessary. However, it is still possible to avoid the water and hostile sharks altogether, either by skirting along the waterline or by passing through the ship in the middle of the map. Capturing the Ruins allows you and your team rapid access through the map without needing to worry about the sharks, and staying in the water guarding the Ruins can prove an advantegous strategy to slow down enemies' advance.

The map is quite open in layout, meaning that you can spot opponents far away, though both east and west control points have either a rocky cliff or dock buildings to cover either team's approach to those points, so it's a good idea to keep an eye on the opponent's side of the shore while in water. The cannon positioned at the south of map can be used to attack both east and west capture points; it is capable of dealing heavy damage, but requires cannonballs found in the ship to operate.

Hostile sharks roam the waters of the map, but when a team captures the Ruins point they turn friendly toward them and will attack the opposing team.

There are bundles on the ship that either team can pick up.

Carrying a cannon ball to the cannon, located at the very south of the map, loads 5 charges into the cannon. After loaded, the cannon can be used to fire the cannon and bombard enemies trying to take or hold either of the land-based capture points.