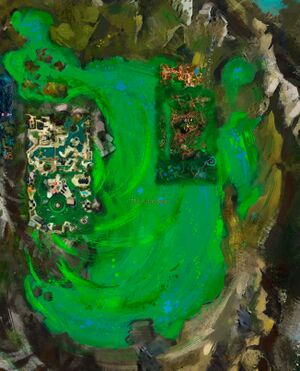 Map of the Jade Sea.

Hundreds of years ago, the Jade Wind petrified everything it touched—even the waters off Cantha’s coastline. Luxon nomads adapted to a world where seafaring happens on foot, and modern innovators are still finding uses for the Jade Sea’s unusual bounty.

The Jade Sea is an internal sea within the continent of Cantha, many years ago the Jade Sea was navigable for Luxons ships, after the Jade Wind occurred when Shiro Tagachi unleashed it the sea became petrified. Many years have passed and the jade sea begins to melt and returns to certain parts to its watery form.

However, large parts of the Jade Sea remain petrified, and are being mined by Xunlai Jade. The company uses the jade in the creation of dragonjade, a material used to power the Canthan Empire.

Prior to the devastating Jade Wind, the Jade Sea was a normal inland sea, so named for its color. At some point, the Luxons arrived and made their homes in the waters, choosing to become a nomadic group sailing across the clear waters. Alongside the Luxons, peaceful naga inhabited the sea, trading with humans and peacefully living along the shoreline.

In 1382 CC (872 AE), Emperor Angsiyan arrived at the Harvest Temple for an annual prayer to the goddess Dwayna. His bodyguard, Shiro Tagachi, influenced by the fallen god Abaddon, struck him down, and was soon slain by the assassin Vizu and the Kurzick and Luxon champions Saint Viktor and Archemorus. However, in his last moments, he let out a death wail that petrified the sea, turning everything in it to literal jade.

Leviathans froze in blocks of jade where they lay. With their habitat turned to stone, local sealife adapted to become land-dwelling. Far beneath the surface, the Deep formed, where the demon Kanaxai would spread his influence. The naga population dwindled to the point that only twenty or so individuals remained.

After the Jade Wind, the Luxons attempted to adapt to the familiar water now transformed into unfamiliar, strange crystal formations. They began mining pure Jadeite from the sea, to be sold to the people of the Empire of the Dragon.

Stub. Key elements of this article are incomplete. You can help the Guild Wars 2 Wiki by expanding it.

During the 250 years, the Jade Sea has changed quite a bit, much of the Sea has been melting and returning to its watery form. However, there is still a large part of the sea frozen, and what is now the Xunlai Jade Quarry is completely of jade empty and now there is an entire village. And what has been the Jade Sea, is used to extract the jade that is in it, to use it in technology, using the Jade Mechs, and providing Cantha with a lot of technology, which now depends on it.