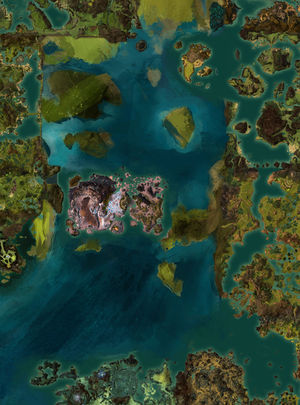 Map of the Sea of Sorrows.

The Sea of Sorrows is a sea surrounded by Kryta, the Southern Shiverpeaks, the Tarnished Coast, Orr, and the Strait of Malchor. When the kingdom of Orr sank in the Cataclysm, the region saw a huge upswing in shipwrecks. This, along with the sinking of Orr merging the Bay of Sirens with the Gulf of Jerick,[1][2] led to it being renamed to its current name. When the Elder Dragon Zhaitan awoke and Orr rose, the risen kingdom caused a cataclysmic tidal wave, known as the Great Tsunami, which washed over nearby coastal regions, including Lion's Arch and the Battle Isles.

Regions
The World of Tyria
Retrieved from "https://wiki.guildwars2.com/index.php?title=Sea_of_Sorrows&oldid=2606832"
Category: