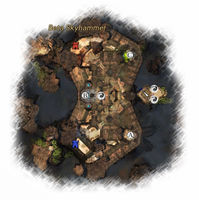 -The first team to reach the score limit wins.
-Control capture points to earn points for your team.
-Defeat enemies to earn a small amount of points for your team.
-Maintain control of the Skyhammer cannon to call down lightning and vaporize your foes.
-Use jump pads to leap over walls and to land on top of raised platforms.
-Beware the translucent blue floor panels. They'll shatter after a couple of seconds.

Skyhammer is a structured PvP map, specifically a conquest map with three capture points. The map features vertical movement and the Skyhammer Cannon as the secondary mechanic.

Once in the room, players can acquire the cannon by claiming the capture point there. Upon a successful capture, the Skyhammer will fire once on all three capture points for the capturing team and then become unavailable for a while, damaging and causing knockdown to enemy players who get caught in the area of effect and neutralizing any capture points that that team doesn't already own. It does not cause friendly-fire damage or knockback and the blast can be dodged.