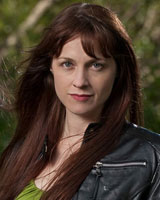 Ree Soesbee is a Writer and Lore & Continuity Designer for ArenaNet. She is ABD on a PhD in Literature & Myth, and has written novels, CCGs and RPGs, including work for the Star Trek RPG, Legend of the Five Rings, and Dragonlance. In addition to her literary work, she studies Japanese, plays the violin, ganks people in PVP, and serves as Companion to the Grand Adventuress of Cats.

Ree Soesbee was one of the narrative designers for ArenaNet from June 2006 to January 2017. She is also the author of the Sea of Sorrows novel set in the Guild Wars universe. She wrote the lyrics for Fear Not This Night.