The Hall of Heroes

The Hall of Heroes 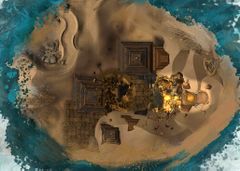 Map of The Hall of Heroes

The Hall of Heroes is a golden fortress located in the center of the Rift which in turn lies in the center of the Mists. Decorated with statues of the Six Gods, it is the afterlife where only the most legendary of heroes' souls are ensconced. Perpetually in something akin to daylight, there is no sun in the skies above the Hall of Heroes; instead, the Hall is illuminated by an unearthly, primeval light in its center.[1]

Lord Odran's death, however, unveiled the numerous protections he had left over his portals, granting any mortal able to reach them free access to the Mists. For over two centuries, tournaments were held at some of these portals, such as the one placed in the Tomb of the Primeval Kings, where mortals fought to impress the legends of old. Though initially enraged by trespassers, the souls found enjoyment at watching, and even guiding, these tournaments.

In 1072 AE, the Tomb of the Primeval Kings was invaded by Abaddon's demonic servants, allied by the forces of Menzies and Dhuum. Though the forces led by the Darknesses were slain by the Order of the Sunspears, Zaishen Order, and adventurers, the portal was deemed too unsafe to continue the tournaments there. The Zaishen took it upon themselves to oversee the tournaments at the Battle Isles.

With the rise of Zhaitan and the flooding of the Battle Isles, Tyrian contact with the Hall of Heroes has ceased, leaving it unclear what the fate of the tournaments across worlds is.