Temple of the Silent Storm

Temple of the Silent Storm 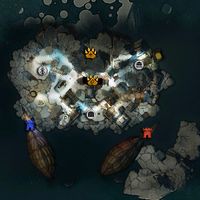 Map of Temple of the Silent Storm

Temple of the Silent Storm is a structured PvP map. It is located on and inside a Kodan iceberg sanctuary. It is a conquest map with three capture points and various meditations that provide buffs for both teams as a secondary mechanic.

The map is riddled with elevation differences, especially in the center area where Meditation of Stillness can be found; Jumping off the ledge will take you to a large cave that contains the Meditation of Tranquility and exit to the south which leads to the Gate capture point. The various ramps and cliffs in the map make attempting of losing opponents and prowling around the map for easy captures a worthwhile effort.

Two 'meditations' spawn periodically through the map. After completing the channeling for each meditation, the respective team acquires the buff granted by that meditation. Communing will be interrupted on taking damage, teleport, stealth, or invulnerability.