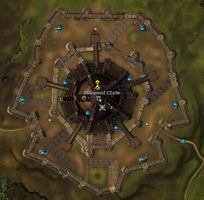 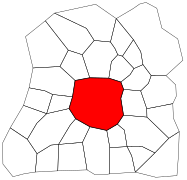 Stonemist Castle dominates the middle of these battlegrounds and has defenses like no other place in the Mists. You'll need plenty of siege weapons and allies if you plan on assaulting this imposing fortress.

Stonemist Castle is located in the center of the Eternal Battlegrounds. It provides 12 points towards a world's war score every 5 minutes, greater than a regular keep which produces only 8. It is the largest objective in World versus World and placed in a very good strategic position on the main map. As such, it is a high-value target usually well defended by players and is much harder to take than a regular keep.

Stonemist Waypoint — (has to be built)

Just off the central rotunda, take the ramp up to the next level. Run around the central glass ceiling to the steep ramp leading up to the third level. After going up that ramp, run over toward the vista, which is located on the terrace just outside the doors. 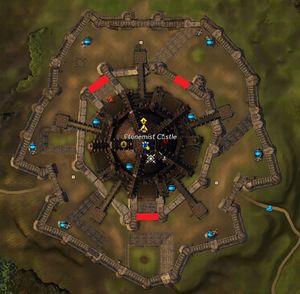 Any 4 of the following synthesizers