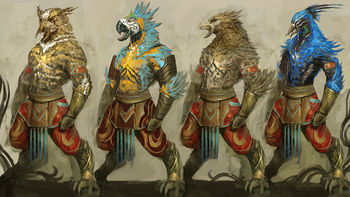 The tengu are a race of avian humanoids that make their home in the Dominion of Winds, along the Tarnished Coast. They are extremely wary of the races of Tyria, and do not allow outsiders into their city.

A few tengu have set up trading posts outside their walls, in order to trade with and observe the other races. They currently remain neutral in all conflicts.

Tengu are a bipedal humanoid race with usually slim, partially hunched, bodies. Next to their beak are two short fangs. The females of their species have plainer plumage and are typically larger than males. Tengu prefer raw meat for their diet, and although avian, they lost their ability to fly in the distant past.

In terms of appearance, there is a large amount of variance from individual to individual, on a par with (or possibly even more so than) the charr. 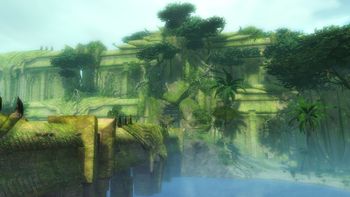 The Dominion of Winds, as seen from Caledon Forest.

The tengu are highly protective of their culture, and it is thought that this is a large contributory factor to their isolationism. They apparently have some ancient, lost knowledge of the Elder Dragons (an awareness of the cyclic nature of their awakening, for example), but it is not known how they acquired it. Most tengu speak Old Canthan, and treat tengu who do not with the same contempt with which they treat all outsiders.[1]

It is known that the tengu houses have distinct cultures within the tengu whole; however, it is not known which houses correspond to which clans or tribes nor is it known which clans survived long enough to form the houses, although tengu from the Caromi and Avicara tribes are both known to reside within the Dominion of Winds. Although the tengu houses have different cultures, they all fervently uphold three basic virtues: honor, family, and history.

The tengu are known to have settlements outside of the Dominion of Winds, often within its shadow, such as Hanto Trading Post and Ireko Tradecamp. Further, other tengu—often alone—are seen across the world or within the Orders, such as Fuji Shadowbane of the Vigil.

As the Pact recovered from their fleet's decimation in the Heart of Maguuma in 1328 AE, they encountered the Quetzal tengu, who have been known to dwell in the dense Maguuma Jungle and Woodland Cascades long before the Dominion of Winds was established. Apparently led by Commander Razorwing and another nameless commander, the Quetzal have kept to the canopy of Auric Basin, out of reach of Mordrem and have been known to assault Pact survivors. It is unknown if the Quetzal had remained in the Maguuma for the past 250 years, or if they joined then left the Dominion of Winds.

The attitude of modern tengu towards spirituality is unknown; however, the Canthan tengu of old believed in an afterlife, which they called the Sky Above the Sky. A sect of tengu were known to have guarded the Celestials during the Canthan Trials of Ascension, meaning defeating them was necessary to become Weh no Su, but their connection to the mainstream tengu belief system is unknown.

It can be inferred that there is at least some surviving element of superstition within tengu society, as young tengu are sometimes given charms to ward against harm.

When they first built the Dominion of Winds, the tengu unified their clans into four houses—North, South, East, and West, one for each of the winds. With the houses, the tengu can be unified while preserving the cultures of the ancient clans. Clans do seem to still exist, however, on a familial level, for example "Clan Talonrend".

Above the four houses, the tengu are ruled by an emperor, who is treated with ultimate deference.

There does not seem to be any single consistent naming scheme for tengu; however, there are several common conventions. Most tengu have short and sharp or Japanese-style forenames, and clan names that can be seen as consisting of two parts. The first part tends to be descriptive (e.g. bright, gold, true), and the second part often refers to an element of avian anatomy (e.g. crest, talon, claw). 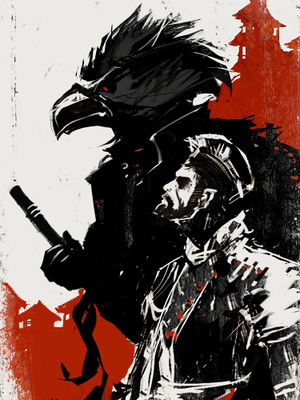 In ancient history, the tengu are said to have lived throughout the world, although only the names of five clans throughout Tyria and Cantha are known. It is these clans who have the most direct relation to the tengu inhabiting the Dominion of Winds today.

Most of the history that is known of the tengu begins with their contact with the humans. After the Jade Wind necessitated further human settlement of Shing Jea Island, the Sensali tribe massacred an entire village and, according to rumour, ate the corpses. War with their Angchu cousins was, for a time, narrowly averted through the shrewd efforts of Emperor Hanjai's personal ambassador and a wise, levelheaded Angchu chieftain in 880 AE. However, it was not possible to prevent the Sensali from attacking, creating a hatred between the two tribes that was only surpassed by their hatred of the mountain yeti. When further human settlement of the island put Angchu hatchlings in contact with foreign diseases, the tengu were forced to kill their own young and they, too, joined the fight against the humans.

The Tengu Wars would rage for almost two centuries, and it was not until early in the reign of Emperor Kisu that it looked like peace may be a possibility. The Emperor's half-brother and Master of Shing Jea Monastery, Togo, was called to the estate of War Minister Wona for a peace summit with the leaders of the Angchu and Sensali, among them Talon Silverwing, Gull Hookbeak, and Swift Honorclaw. The summit was a trap, however, intended to kill Togo and pin the blame on the tengu, creating the pretext for a genocide. Togo and Talon Silverwing managed to fight their way out and Wona was put down, but the damage to human-Sensali relations was permanent. Later, in 1071 AE, a formal peace with the Angchu was finally reached, bringing an official end to the Tengu Wars. The peace was commemorated annually as the Day of the Tengu, at least while the peace lasted.

Not long after, in 1080 AE, the Empire of the Dragon experienced a surge of nationalism in the wake of the return of Shiro Tagachi and his plague. After routing the Am Fah and Jade Brotherhood street gangs, the newly-formed Ministry of Purity turned their sights on the tengu that lived on the mainland, in Kaineng City. The conflict soon spilled over onto Shing Jea Island, and peace with the Angchu finally broke down when Ministry guards witnessed Ryun Grayfeather defending Tsumei Village against Sensali, believing them to be working together and killing Grayfeather.

In 1127 AE, Kisu's successor, Usoku, finished what the Ministry had started and annexed the vassal states of Kurzick and Luxon back into the empire, before beginning a campaign to drive out non-humans such as tengu and dredge. Against the might of the Canthan military, the tengu had no choice but to flee north, to Tyria and Elona.

When the Elder Dragon Zhaitan awoke in 1219 AE in an event the tengu call the Great Tsunami, the tengu of the world saw it as a sign to return to Tyria. It was a descendant of Talon Silverwing that led the charge through Zhaitan's Risen forces. When the tengu reached land, they built the Dominion of Winds atop the island once known as Sanctum Cay, and unified their clans into the four modern houses, one for each of the winds.[2] Out of fear of a repeated past, they constructed a great wall to encircle their city, and non-tengu are not permitted to enter.[3]

Recently, as small groups of Destroyers have begun surfacing on the inside of the Dominion, some of the tengu have made tentative ventures into establishing contact with the outside world. After the defeat of Zhaitan, Izu Steelshrike mentioned that the death of an Elder Dragon may spark renewed tengu interest into joining the other races in their fight against the dragons. However, no such movement has been seen so far.

During her preparations to assault Lion's Arch, Scarlet Briar considered forging an alliance between the tengu and largos, but for one reason or another this did not come to pass. In 1327 AE, when Scarlet's forces attacked Lion's Arch, the tengu stationed at the Shuttered Gate retreated to within its boundaries. During the battle, any creature that attempted to approach the gate was met with a storm of arrows, regardless of allegiance. Afterwards, the tengu returned, with no apparent change in their attitude.