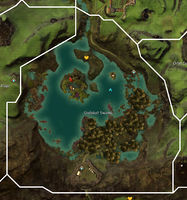 Malevolent spirit monsters from the Underworld haunt the Godslost Swamp, where the barrier between this world and theirs is the thinnest. The greatest and most terrifying of these fell beasts is the Shadow Behemoth, a gargantuan fiend that broke through to the world of light and substance to devour and destroy all that it can.

— Pre-launch description of the area

The Godslost Swamp is an area of Queensdale, in which the sunken Temple of the Ages resides. It was formerly part of the Black Curtain. Part of the swamp has been overrun with Portals to the Underworld, due to a weakening of the barriers between Tyria and the Mists.

Temple of the Ages —

This vista is up a slope in the center of the swamp, to go up you need to use the roots of a tree directly west of Deathroot Shack.

Temple of the Ages

At the Durmand Priory camp
Scholar Taryn: This'll lead straight into the Underworld, if it works right.
Brother Ral: And if it doesn't?
Scholar Taryn: I suppose we'll discover that later.
(After the fight is over)
Brother Ral: Indeed. We discovered what would happen.
Scholar Taryn: Yes, yes we did. Think we should do it again sometime?
Brother Ral: Oh, probably not. That never stops us, though.
Scholar Taryn: When it comes to science, err on the side of curiosity.

At Swamplost Haven
Lionguard (1): Whoever decided to station me at the swamp must really hate me. It's so humid, I can feel my armor rusting.
Lionguard (2): Maybe you'd start getting better assignments if you stopped complaining.