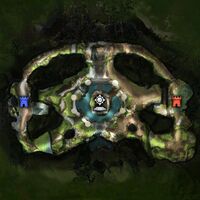 Courtyard is a structured PvP map. It can be played either in the Murderball or Team Deathmatch mode.

-The first team to reach the score limit wins.
-Kill players to earn points for your team.
Capture the Orb of Impending Doom and keep it close to the center of the map to earn maximum points.
The player who controls the Orb of Impeding Doom will deal more damage, but will also take damage over time and is doomed to die a tragic death.

The player carrying the orb will be under the effect Impending Doom which grants +20% outgoing damage while also applying 3% stacking damage from his maximum health to the orb carrier every 2 seconds and increase it by another stack.

Players who die while carrying the orb cannot be resurrected. When a player holding the orb dies, the orb is returned to the altar in the center of the map.

Wipe out the enemy team to win each round.