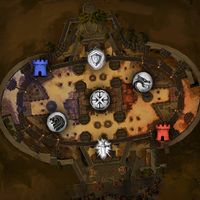 Eternal Coliseum is a structured PvP conquest map with three capture points. The map features the Sword of Reaping and the Shield of Life as the secondary mechanics of the map.

During the game players can attempt to capture two artifacts known as the Sword of Reaping and the Shield of Life. They spawn every 3 minutes.

In addition to capturing artifacts, players gain a stack of an effect called Coliseum Prestige for each kill they participate in. Once a player reaches 7 stacks they gain access to a special action skill called Rally the Crowd. Activating it grants each team member the Crowd Favor effect which results in a bonus of 50 to all base stats and lasts for 90 seconds.

Before visual and functional update