Mounts are far more than a speed boost—they're a whole new way to explore the world of Tyria. Unlock and train your new companions using the max-level Mastery character progression system, and explore freely by leaping across canyons, bounding up high cliffs, and skimming over quicksand. 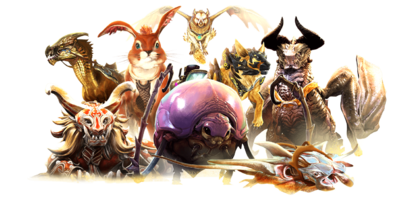 Each mount has its own unique set of abilities and characteristics; they also possess one offensive skill that, when used, dismounts the player. Their skills are documented on the individual mount pages, linked from the first column of the following table.

Once unlocked, mounts can be used by any character on the player's account. Mounts can be summoned any time using the X default key. Right-clicking the skill icon will also allow you to choose one of your unlocked mounts. Pressing the same key will dismount you a short distance from the ground, meaning you can dismount and then glide. Player characters themselves are immune to fall damage while mounted; with certain exceptions, they will instead be forcibly dismounted and knocked down. This does not, however, impact the mount in any way; the player can mount again once the character recovers.

A player cannot mount while in combat, in a Mounts Disabled zone, or an area where the mount would not fit. Being in combat does not affect the movement speed of a mount. Entering a

Mounts' health, stamina and engage skill damage are all separate and independent from the player's gear.

Default key for Mount Action 1 is V and Mount Action 2 is C. A mount's Engage skill is triggered with 1. See the individual mount pages for further skill details.

The following additional skills are unlocked and available on all mounts when their respective mastery is fully trained.

Mount skins can be unlocked account-wide by purchasing them in the Gem Store. The skins have only cosmetic effects; there are no gameplay advantages associated with them.

(*) The mounts in the marked rows either don't appear in API:2/account/mounts/skins and API:2/mounts/skins and/or don't have an id set. Therefore it cannot be checked if the skins have been unlocked.