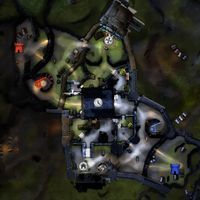 Map of Battle of Kyhlo

Battle of Kyhlo is a structured PvP map. It is a conquest map with three capture points and siege weapons as the secondary mechanic. 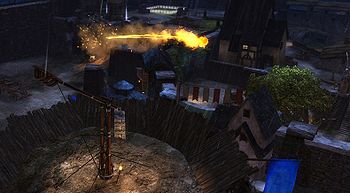 ) which can bombard any enemy or area on the battlefield. It causes massive damage and knockback to enemy players who get caught in the area of effect. It does not affect your allies. Unlike other trebuchets, its Fire skill is ground targeted and the trebuchet automatically turns before firing.

The trebuchets can be destroyed by any opposing player. Once destroyed, a repair kit will spawn near the trebuchet that players can use to make it functional again.

The boxes and buildings around the clocktower will destroy themselves as the match progresses.

Clocktower before visual and functional change