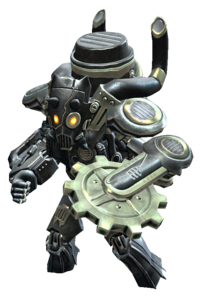 Steam creatures are mysterious, mostly mechanical beings which emerge from equally enigmatic Steam Portals. They have appeared in Lornar's Pass and Brisban Wildlands and show aggressive tendencies as they attempt to build more of their kind and expand their territory for reasons unknown.

The origin of the steam creatures currently threatening to overrun Lornar's Pass is still largely a mystery. They began arriving a short while before 1325 AE on the Lake of Lamentation through Steam Portals. After building a Steam Mechagate, they went on the offensive and have continued their attacks ever since. The Durmand Priory managed to discover that the steam creatures were part-biological, although not enough to sustain life. All other details, such as their creator(s) and their intentions, continued to elude the scholars. 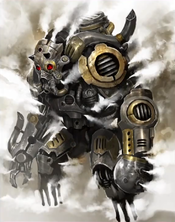 Concept art of a steam creature.

A few clues surfaced since, however. One possible point of origin for the steam creatures was interdimensional, coming from a potential alternate future reality created by the Infinity Ball.[1][2] In this suggested alternate future, one of the asura contenders for the 1325 AE Snaff Prize went on to form an organization known as the Conclave, declaring themselves the Grand High Sovereign of Tyria and creating the steam creatures to make that vision a reality. Little else is known about this potential reality, except that the alternate version of Shodd held the title "Grand Vice Admiral", and that both the High Sovereign and the Vice Admiral had taken to the field in what they called the Battle of Divinity's Reach.

In 1326 AE, the steam creatures formed a part of the sylvari terrorist Scarlet Briar's invasions of the Central Tyria although they were later phased out of her forces. Scarlet had previously worked on the steam creatures, and it was this fact that allowed her to hijack Queen Jennah's watchknights, which had been based on steam creatures salvaged by humans and which had even used some of the same parts.[3] The hijacked watchknights became twisted nightmares, a voice-activated mechanical army over whom Scarlet had complete control.

The Pact Commander hallucinated Scarlet taunting them in the Tower of Nightmares, among these taunts was an intense interest in the creator of the Infinity Ball, but otherwise she was not known to have a connection to the Grand High Sovereign or the Conclave.[4]

In 1327 AE, the Pact Commander's adventuring party discovered that the steam creatures in Lornar's Pass and the Brisban Wildlands were likely to be the creation of Scarlet Briar, who had used scrap iron from black-market dredge contacts to build steam minotaurs in the Town of Prosperity prior to her transformation from Ceara to Scarlet. Ceara noted in her holographic diary that the steam brains showed signs of emerging intelligence, designing their own steam portals and creating further steam creatures when under threat. After Ceara had used Omadd's mind opening device to gaze into the Eternal Alchemy and became Scarlet after being subjected to the whispers of Mordremoth, she reported no longer needing her steam creature prototypes and sent them through a portal to Lornar's Pass and the Brisban Wildlands.[5]