From Guild Wars 2 Wiki
Jump to navigationJump to search
Spoiler alert: The following text contains spoilers relating to the optional norn Personal Story of having the intuition to guard the Mists . 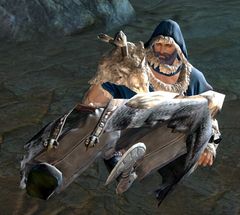 Havroun Solvi is the havroun of Wolf. He has an apprentice called Valda.

While training Apprentice Valda to spirit walk, the two were assaulted by the Sons of Svanir led by Styrr Frostblade. Both were captured, and Frostblade impaled Solvi with a spike of corrupted ice, which left Solvi stuck in between Tyria and the Mists, as he was spirit walking at the time. This allowed Frostblade to create Corrupted Portals into the Mists at will, allowing the Sons of Svanir to invade them and, by extension, Jormag as well.

After Valda was rescued by Eir Stegalkin and the Slayer of Issormir, the trio tracked down Frostblade and Solvi to Frusenfell Creek. There, they confronted the Sons of Svanir who came out from the Mists to help in the fight, but they were eventually defeated and killed, including Frostblade, saving the Mists from their incursions. Unfortunately, Solvi was too gravely wounded so he proclaimed Valda as the new Wolf Havroun, and perished shortly after.