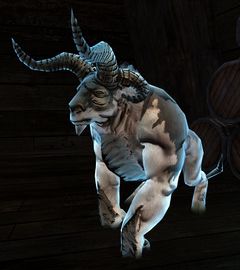 Minotaur Spirit, also known as Spirit of Minotaur or simply Minotaur, is one of the lesser Spirits of the Wild and the natural embodiment of all minotaurs.[1][2] He has not been seen in generations, only to reappear recently due to Sons of Svanir hunting down various minotaurs to enrage the Spirit. Minotaur represents untamed strength and savage cunning.[3]

As the natural embodiment of all minotaurs,[1] Minotaur was revered as one of the Spirits of the Wild among the norn. He represented untamed strength and savage cunning.[3]

After the Elder Dragon Jormag's rise and the norn exodus in 1165 AE, all Spirits became aware of a prophecy involving a chosen norn who would either slay or fall to Jormag after cracking the Fang of the Serpent.[4] As generations passed since the exodus, Minotaur was slowly forgotten among most norn.[5]

In 1325 AE, Eir Stegalkin and the Slayer of Issormir met with Ferghen the Tracker who had asked for their aid in protecting a caravan from rampaging minotaurs. The trio soon witnessed Minotaur himself appearing for the first time in generations, clearly angered by something as he directed minotaurs to attack all hunters crossing the herd's path.[5]

The Slayer was sent to look for Minotaur's tracks to find out the cause for the Spirit's violent actions. The tracks led the Slayer to the Sons of Svanir who revealed that they had been feeding minotaurs to an icebrood champion under orders of a high-ranking officer named Vidkun with the intention of drawing Minotaur out, thus explaining why the Spirit had become angry. They planned to feed the Spirit to the champion which would then become powerful enough to lay waste to Hoelbrak in Jormag's name.[6]

The Slayer informed Eir of the Sons' plan, and the pair headed after Minotaur, finding the weakened Spirit being hunted by the Sons at Hangrammr Climb. With help of the local norn, they were able to rescue Minotaur, hoping that the kind act would make the Spirit stop attacking innocent caravans. The pair chose to either get the Sons drunk as a distraction or ask for Minotaur's blessing to turn into minotaurs in order to free the trapped herd. Minotaur chose not to speak during these interactions, preferring to only communicate via snorts and dipping its horns.

After the successful rescue, Eir, the Slayer and Eir's dire wolf Garm met with Minotaur at Hunter's Lake where they had tracked Vidkun and his icebrood beast to. Vidkun snidely greeted the party, thanking them for delivering Minotaur to the icebrood. After a fierce battle, they were able to defeat both Vidkun and the beast and ensure the safety of Minotaur's herd. In the aftermath, Eir assured the Slayer that Minotaur would no longer attack the caravans. The Slayer in turn hoped that Minotaur would remember them should he become one of the major Spirits in the future.

Later that year, Minotaur appeared in Hoelbrak to watch the Championship Fight between the Slayer and Mikkel Toivosson. The young norn Juli claimed to have spoken to the Spirit and said how Minotaur expected the Slayer to win the fight. After the match had ended in the Slayer's favor, Juli continued that Minotaur had liked the fight.

In 1333 AE, Braham Eirsson tried to invoke the Great Spirits of Bear, Raven, Snow Leopard, and Wolf to open the enchanted door to the Sanctum of the Wild, an ancient place of power in the Drizzlewood Coast where the norn had first encountered the Spirits of the Wild. When the Great Spirits remained silent, Braham resorted to reaching out to the Lesser Spirits to invoke their power instead as the door would only open if several Spirits worked together.

As the Lesser Spirits did not know Braham, he had to prove his worth as the norn of prophecy. Several Lesser Spirits, including Minotaur, collectively spoke through Braham and presented a riddle which they expected Braham and his companions, including the Pact Commander, to solve as a test. The Spirits ultimately helped open the door with their spiritual energy once Braham and the Commander had successfully solved the riddle by placing notable Spirits' statues on their pedestals in a specific order.[7]