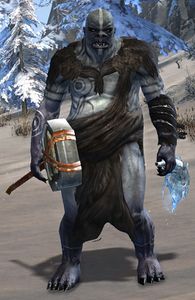 Jormag will give us the strength to restore our glory. We will rule the mountains again!

Korag is a jotun clan leader who has been converted by the Sons of Svanir into worshiping the Elder Dragon Jormag. He seeks to gain power from Jormag in order to reclaim his heritage of the ancient giant-kings.

Korag ruled a jotun clan, being one of the few jotun left who was a direct descendant of the ancient giant-kings.[1] In 1325 AE, the Sons of Svanir managed to convert Korag and his tribe into worshiping the Elder Dragon Jormag.[2] In exchange for receiving Jormag's power, Korag would reclaim the Shiverpeak Mountains for the jotun and rule them.

A party consisting of Eir Stegalkin, the Slayer of Issormir and the dire wolf Garm eventually discovered what the Sons of Svanir were up. While Eir and Garm took one of the Svanir survivors, Herjarr, to Hoelbrak for questioning, the Slayer headed for the Osenfold Shear to challenge Korag to a duel before the would-be giant-king could convert more jotun to his cause.

However, upon experiencing the magic of the Worship Stone and learning of the history of the jotun from the memory of an ancient giant-king called Elder Thruln, the Slayer took pity on Korag and offered him a chance to reject the Ice Dragon's temptations so he could save what was left of his people. Korag dismissed the idea and announced his decision to visit the Sons of Svanir to demand Jormag's blessing while urging the Slayer to find more power in preparation for their future confrontation.

Armed with either the blessing of Wolf or a strong weapon forged by Beigarth the Smith, the Slayer returned to the Osenfold Shear in the company of Eir and Garm to meet with Korag again. Having been empowered by Jormag, Korag mockingly greeted the Slayer's party and engaged them in battle once the Slayer expressed pity on how the giant-king had sold his soul and his people for the promise of power and a lifetime of slavery under the Ice Dragon.

After a fierce battle, the party successfully slew Korag. The rest of the jotun tribe surrounded the victorious trio at first but let them pass once the jotun Bergris announced that the tribe would become powerful again someday but not through Jormag's influence.