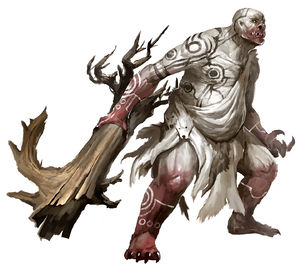 See this stone, and behold the power that will one day conquer the world.

— Written on a jotun monument

The jotun (pronounced JŌ-tun[1]) are a race of lesser giants who thrive in the Shiverpeak Mountains. They were once a powerful and magical people, knowledgeable both in sorcery and natural philosophy. Once a grand race, they now survive as savages in the citadels of their ancestors. 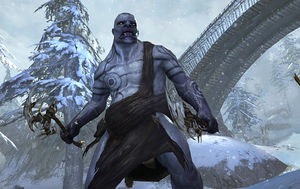 Jotun appear as large bipedal figures akin to ogres (the two races are said to be interlinked), appearing as enlarged forms of humans or norn. However, their skin looks vastly different in that it appears to be paler in some cases, or with a blue tint in others. Likewise, their faces appear to be deformed in contrast to the smaller races. According to Durmand Priory scholars, they have become uglier since their civlization's fall, based on jotun relics.[2]

The jotun divide themselves into tribes based on relation or union, and are extremely hostile to all outside of that tribe. They hold strength above all else, and are highly narcissistic, leading them to viewing all others lesser than them and in turn hunting them down. The jotun will even attempt to eliminate others of their own race who are not members of their tribe, which is an almost insurmountable obstacle to any possibility of the fallen race ever reuniting to reclaim their lost glory of ages past.

They further separate their society based on sexes, with males being more aggressive and taking leadership roles while females are left to childbearing. Because of the hostility, the jotun heavily protect their females and children in order to ensure their tribe continues on. As such, they are rarely seen by anyone outside of the tribe.

Unlike other more primitive races, the jotun do not hold any moral codes or sense of honor. They will do what they view is necessary to eliminate their foes and benefits themselves. Any deals they make will be broken once they view it is no longer in their interest, even if it means killing their own leader.

The jotun do not have a traditional religion. Instead of gods or worship, they take their legends of the past almost to a religious level and look up to their ancestors, calling upon their aid and attempting to emulate them through their actions. There are also cases of jotun preferring to revere themselves. Similarly, the jotun hold a high reverence for their ancestral homelands and, as such, are territorial when other races pass through their land.

The modern jotun tribes are kratocratic in nature, as they are led by the strongest and most cunning individual in the tribe, regardless of what form that strength takes as long as it is shown through force or deception. If another jotun in the tribe believes that the leader showed a sign of weakness, the leader would be attacked and replaced regardless of the ramifications to the tribe. 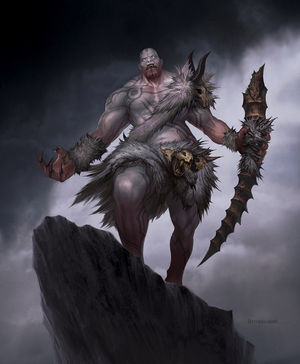 The jotun once wielded great power.

Despite their modern appearance, the jotun were once a highly advanced race, full of great spellcasters and lore-keepers before they fell through constant civil wars. They once had extensive knowledge of the stars and earth, and recorded their knowledge of them and the Elder Dragons in their monument stones, runestones, and stelae. The knowledge recovered by the Durmand Priory mentions the creation myths of the jotun that speak of six "swallowers" that rose to wipe the world of life in series of cycles. One of their most powerful artifacts, the Mystic Telescope, is believed to have been used to foresee the awakening of the Elder Dragons in the heavens.

When the Elder Dragons last rose, the jotun, like the other races of the world, possessed the ability to use magic with no restrictions until the Seers sealed it all within the Bloodstone. They survived the Elder Dragons' rise due to being hidden by Glint along with the Seers, dwarves, and Forgotten.

According to Thrulnn the Lost, before their fall the jotun and norn were favored by the Six Human Gods and granted magic that led the races to prominence. He refers to this time as the Age of Giants. In time, their power came to rival that of the gods themselves, who began to fear that the jotun would use magic against them. The jotun giant-kings, confused and enraged, turned on one another, and the gods abandoned them, taking their magic away and handed it over to other races, causing the crumbling of jotun civilization. However, Elder Thruln and Priory scholars offer a different explanation for the jotun's fall. They say that the jotun became too prideful and sought to make their own tribes superior, bringing the tribes into civil war out of their pride and greed. From this same pride and greed, the jotun are said to never marry outside of their tribe, and some Priory scholars mention that based on their ancient monuments, modern Jotun are far uglier than their ancient forebears as well.

Whichever story is more truthful, after the Exodus of the Gods, the jotun regained the ability to use magic in its less potent form. However, their lore-keepers, sages, and mystics had largely been killed off and the knowledge of using their old magic and technology became lost to them, leaving only the monuments and citadels behind as the race fell from power over the centuries.