Hare (Spirit of the Wild) 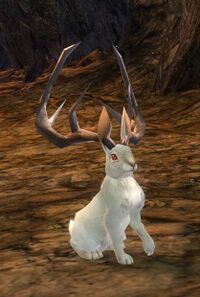 Snowshoe Hare! She's one of the lesser spirits, but she's smart as Raven, loyal as Wolf, strong as Bear...well, at least in the legs.

Hare, also known as Spirit of Hare,[1] Bunny,[2] and Snowshoe Hare,[3] is one of the lesser Spirits of the Wild. Many norn either do not hold Hare in high regard, question her existence, or are simply unaware of her despite her supposedly having a shrine dedicated to her, so few revere her.[4][5][6][7]

Hare is said to enjoy root vegetables and be fast as Snow Leopard, smart as Raven, loyal as Wolf, and strong as Bear in her legs.[3][7] She is known to guide jackalopes to those who perform the ritual of the jackalope; once caught, the fur of the jackalope provides sight beyond someone's own. Untamed, Hare challenges travelers to outlast her mettle in the wilderness of the norn frontier where only the fierce and wild at heart survive.[8]

Norn parents with many children are said to be blessed by Hare.[1] When the young norn Lietta was lost in a blizzard and found her way to Skovtrolde Hearthstead by following a rabbit, she claimed that Hare had sent the rabbit to guide her to safety.