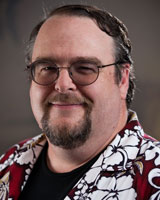 Jeff Grubb builds worlds for a living. He is one of the founders of Dragonlance and a co-creator of the Forgotten Realms setting. He is the author of a huge amount of game product, over 30 short stories and 15 novels, including Ghosts of Ascalon, for set in the world of Guild Wars 2. He has been building lore and taking names in Guild Wars starting with Nightfall, and can often be found cackling over the lore like Dr. Frankenstein sizing up the latest batch of body parts. He lives in Seattle with his indulgent and understanding bride and two incredibly apathetic cats.

Jeff Grubb was an award-winning game designer, world-builder extraordinaire and author at ArenaNet. He is also credited as one of the authors of Ghosts of Ascalon. He announced on his blog on Feb. 1st, 2016 that he would be leaving ArenaNet for Amazon to become a 'Senior Narrative Designer' with his last office day being Feb. 12, 2016.