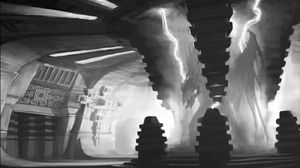 Dragon energy being studied by the Inquest.

I told the Inquest chaos energy was a misnomer. Mind you, dragon energy is tricky, so I can see how they flubbed it.

The existence of something called "dragon energy" (also referred to as dragon magic, draconic energy, and draconic magic) has been alluded to several times. However, what it is, or how it differs from regular magic, is not exactly clear.

Some of Snaff's research was focused on dragon energy, where he made major discoveries into the field, including that the Elder Dragons radiate their own unique magical energies. Snaff discontinued work on draconic energies because he deemed it was too dangerous.

After Snaff's death, the research into dragon energy was continued by the Inquest. Their first known experiments with dragon energy was at Thaumanova Reactor, which was originally to research chaos magic. They, along with their so-called "specialist", Scarlet Briar, claimed there was a link between the Thaumanova's chaos energy and Elder Dragon energy. The experiments pushed things in dangerous new directions and past the point of safe operation, resulting in the reactor melting down.

Research, led by Snaff's former apprentice Kudu, continued later at the Infinite Coil Reactor, a facility the Inquest had built after Thaumanova's explosion, both to power devices such as the Iron Forgeman and to control dragon minions in an attempt to match the power of the Elder Dragons. In his experiments conducted in 1325 AE, Kudu concentrated these energies to the center of the Crucible of Eternity and exposed captive test subjects to the dragon energies, corrupting them into dragon minions that only he could control. Kudu also experimented with combining the corruptive qualities of multiple Elder Dragons, resulting in unique hybrid dragon champions such as Subject Alpha and Kudu's Monster.

In 1331 AE, the Inquest continued experiments with dragon energy and finding ways to enhance communications technology with the use of the unique hive-mind abilities of the Elder Dragon Kralkatorrik's Branded minions which the Inquest had captured for study.[1] Overseer Kuda created simulacra of various dragon champions and even introduced a new hybrid minion, Subject Beta, in Rata Primus.

Tests attempting to verify the theory of draconic enchanto-consumption have shown that the amount of power and free will a dragon minion has is proportional to the amount of dragon energy imbued in it by its master.