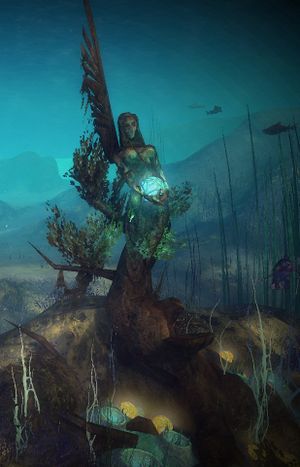 Mellaggan is the quaggan goddess that represents the bounty and wealth of the ocean. She is suggested to be an interpretation of the human god Melandru.[1] However, the quaggans view the two to be separate deities but are too polite to say so when human scholars claim otherwise.[2] The quaggans believe their goddess was killed long ago when the krait invaded their old homelands.[3] Despite this, Mellaggan continues to have shamans in the present day.[4] Some quaggans believe that Mellaggan drew them to shallow waters because the krait, sharks, and skale would be less dangerous foes than what the quaggans left behind in the depths of the Unending Ocean.[5]

The northern quaggans use an artifact called the Shimmer Bauble to honor the power of Mellaggan. Recovering the bauble from the depths marks the beginning of the Quaggan Games.[6] The quaggan assigned as the bauble runner returns the bauble to the depths when the games have concluded.[7] The southern quaggans leave offerings at Mellaggan Shrine in Lake Gendarr and pray for justice and peace.[3]