Otter (Spirit of the Wild) 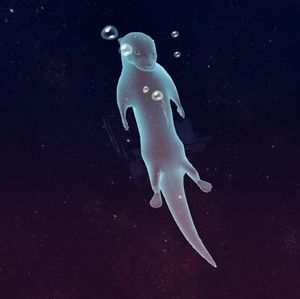 A vision of what appears to be the Otter spirit.[1]

Otter, also known as Otter Spirit, is one of the lesser Spirits of the Wild and the natural embodiment of all otters.[2] She is a fickle Spirit, but the few boons she grants are considered powerful gifts.[3]

As the natural embodiment of all otters,[2] Otter was revered as one of the lesser Spirits of the Wild among the norn. She was known as a fickle Spirit, but the few boons she granted were considered to be powerful gifts.[3] According to norn legend, Otter favors those who remember.[4] In the past, the famous norn Olaf Olafson used an enchanted sword to lock various treasures, including artifacts blessed by Otter, into a hidden, remote vault east of the Sanctum of the Wild in northern Drizzlewood Coast.[5]

After the Elder Dragon Jormag's rise and the norn exodus in 1165 AE, all Spirits became aware of a prophecy involving a chosen norn who would either slay or fall to Jormag after cracking the Fang of the Serpent.[6]

In 1333 AE, Braham Eirsson tried to invoke the Great Spirits of Bear, Raven, Snow Leopard, and Wolf to open the enchanted door to the Sanctum of the Wild, an ancient place of power in the Drizzlewood Coast where the norn had first encountered the Spirits of the Wild. When the Great Spirits remained silent, Braham resorted to reaching out to the Lesser Spirits to invoke their power instead as the door would only open if several Spirits worked together.

As the Lesser Spirits did not know Braham, he had to prove his worth as the norn of prophecy. Several Lesser Spirits, including Otter, collectively spoke through Braham and presented a riddle which they expected Braham and his companions, including the Pact Commander, to solve as a test. The Spirits ultimately helped open the door with their spiritual energy once Braham and the Commander had successfully solved the riddle by placing notable Spirits' statues on their pedestals in a specific order.[7]

While exploring the war-torn Drizzlewood Coast, the Pact Commander began a scavenger hunt to find map fragments guiding seekers to Olaf Olafson's secret which turned out to be the enchanted sword acting as a key to the famous norn's hidden vault. Upon encountering and talking with various ghostly and living treasure hunters who were also looking for the vault based on individual clues, the Commander eventually pieced all the clues together and found Olafson's hidden vault deep in the north.

Among Olafson's treasures was an ancient talisman which had been enchanted by Otter herself. Influenced by the talisman's spiritual magic, the Commander was able to collect long-lost memories of norn from centuries ago which Otter had preserved and scattered throughout northern Drizzlewood Coast for safekeeping. Piecing together these memories allowed the Commander to locate more artifacts enchanted by Otter that granted the Commander a magical boon to locate even more treasures within the mountains. As a final blessing, Otter subtly guided the Commander to locate an ancient norn cape pin which had been worn by norn who had been favored by the fickle Spirit of the Wild. The enchanted pin would allow its wearer to see spiritual glimpses of Otter herself swimming around the person she had granted her boons to.