This article is about the hylek sun god. For the hylek tribe, see Zintl (tribe). 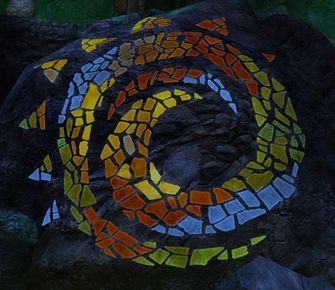 Hylek markings of the sun.

Zintl is the lifebringer. He is pink at dawn, blushes with passion at the end of the day, and glows golden in between to warm and inspire us. (...) Without him, there can be no hylek, no sylvari, no charr, no anyone. He is the great father, the generous chieftain of all tribes together.

Zintl is the name of the hylek's sun god. Many hylek simply refer to their god as "The Sun" or "The Sun God". Though it's unclear if they give a defined persona to Zintl, or if Zintl is an actual being (either in the past alone or in the present still), the hylek see the sun itself as their god, and see it as a lifebringer to all things equally, but consider their own race the "Sun God's children".

The hylek venerate Zintl in numerous fashions, depending on the tribes, but many focus around combat. The hylek around Ventry Bay are known to honor Zintl by fighting four great beasts in order to prove their worth, while the Momoztli choose their champions by those who "have the Sun God's favor" by completing three tests: the Challenge of Vision, where stationary targets are shot with turrets; Challenge of Words, where one speaks of their past deeds and future intent; and Challenge of Might, where one fights various beasts.

At Astrozintli Forelands, in the center of their sizable village and pilgrimage site known as Zintl Holy Grounds, the hylek have built a great holy temple in Zintl's honor where many tribes gather to both seek shelter and worship the Sun. A crystal is placed at the top of this temple, and through it Zintl's rays shine down through the temple, quieting the hylek's unease. Judgement Rock is another holy site to the followers of Zintl, being a place where they say the sun casts sacred light upon the ground.

The hylek know of a potion called "The Eye of the Sun" which gives the drinker an immense power and golden glow, though it is highly poisonous. Although the potion is extremely difficult to make and very unstable, it is said to have the power to transform the imbiber into an avatar of the Sun. The potion was considered a myth by many Tyrian scholars until priest Tochzotl of the Ogotl tribe brewed it and demonstrated its power when facing a sylvari party led by Trahearne in combat in 1325 AE.

A tribe of red-skinned hylek calling themselves the Zintl after the god they worship reside in the Silverwastes. These worshipers of the Sun God are extremely egotistical and have made numerous attempts to convert the Itzel and Nuhoch tribes within the Heart of Maguuma to the worship of Zintl following the upheavals caused by the Elder Dragon Mordremoth's awakening in 1328 AE. The Zintl attempt conversion through treachery and deception, indoctrination or by force, though they are not always openly hostile unlike the vast majority of red-skinned hylek unless they are provoked.