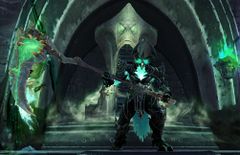 Mortals. You believe yourselves saviors, naturally. You seek to write the conclusion of your legend. There is no conclusion more natural than death.

Dhuum is the former God of Death who was usurped and imprisoned by Grenth with the help of the Seven Reapers. He serves as the final boss of the Hall of Chains raid. 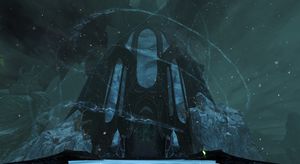 The Hall of Judgment which serves as Dhuum's prison.

Dhuum is the previous God of Death, claimed to be the immortal embodiment of death itself. He was a cruel god who consumed the souls of the dead, preventing resurrection and undeath, and hunted down those who had escaped death with the promise of "death undeniable". He ruled from his tower in the Underworld.

Around 48 BE,[1] Grenth, the Tyrian-born half-god son of the goddess Dwayna, challenged Dhuum with the help of seven mortals and ultimately defeated him in the ossuary of the Cathedral of Eternal Radiance in Orr. Dhuum's tower in the Underworld was shattered, creating the Chaos Planes.[2] His power was transferred to Grenth who sealed the fallen god within the Underworld's Hall of Judgment behind enchanted doors and layers of divine magic as the new God of Death was unable to destroy Dhuum.[3] The real reason for the sealing would remain elusive to scholars, however.[4] The mortals who aided Grenth were rewarded and became known as the Seven Reapers, and would supervise portions of the Underworld under Grenth's rule.[5]

While imprisoned, Dhuum continued to devour the souls of those killed in the Underworld, slowly rebuilding his strength. In the late eleventh century AE, Dhuum's forces allied with Abaddon's and Menzies's, allowing them to launch an assault on the Underworld, imprison the Seven Reapers and take control of large portions of the realm. In addition to this, one of Dhuum's generals, The Fury, sent an army of titans through the Door of Komalie in the Ring of Fire when it was opened, as well as launched an assault on Dragon Festival in Cantha in 1072 AE before ultimately joining in bringing about Nightfall in Elona in 1075 AE.

After centuries of devouring souls, Dhuum was finally able to accumulate enough power to break free of his bonds, but mortals aided by the Seven Reapers were able to perform a ritual to return Dhuum to his dormant state. However, this new imprisonment was temporary, and Dhuum was continuously breaking free of the bonds the Reapers were imprisoning him in. 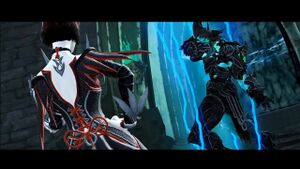 After Grenth's departure from the Underworld, Dhuum managed to reverse the seal placed on him and forced the River of Souls to be redirected and feed himself directly, further strengthening himself. Following this, he corrupted much of the Underworld, twisting some of Grenth's own servants to his cause. In doing this, Dhuum planned to invade Tyria and bring about the annihilation of humanity.[6]

Dhuum's efforts had been slowed by the spirits of the Ice Wastes, led by Desmina, Grenth's first priestess. In 1330 AE, Dhuum's skeletal minions appeared in Tyria and slaughtered any of Grenth's necromancer followers who had heard Desmina's call for aid and had been investigating Godslost Swamp and Reaper's Gate; the two locations being known places of power closely tied to the Underworld. A few Tyrian necromancers successfully crossed over to the Underworld, but they were swiftly eliminated by Dhuum's minions.

It took the combined efforts of Desmina, the Seven Reapers, and a group of mortal raiders to fight through Dhuum's minions, eventually reaching the former god's throne deep within the Hall of Judgment. Dhuum fought the mortal raiders himself while the Reapers prepared their spells. As Dhuum fought, he unleashed his minions on the Reapers to stop them. The Reapers perished in later stages of the battle but whether it was because of Dhuum's attack or Desmina or someone else's meddling remains unknown.[6][7]

Despite the Reapers' demise, the battle for Tyria turned in the raiders' favor when they assisted Desmina with continuing the ritual in the Reapers' place. Dhuum was defeated once more in the end, and his essence left the dark armor he had been inhabiting as he was sealed within a more powerful prison than the ones that had contained him before, this time seemingly for good.

For walkthrough, see: Hall of Chains#The Voice in the Void