This article is about the lore historical event. For the PvP map, see Legacy of the Foefire. 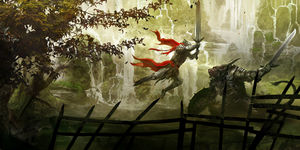 In 1090 AE the Flame Legion surrounded Ascalon City for one final assault on the city's walls. The legion's Imperator called for his elite assassins, the Fireshadows warband, to sneak into the city and assassinate King Adelbern. He believed that this would cripple the Ascalonian human forces, and would leave them incapable of mounting any serious united defense against the charr onslaught.

The following night Legionnaire Frye Fireburn and his warband infiltrated the city and silently slaughtered their way through the palace into the king's private chambers. Once they reached the royal quarters, it was discovered to be empty and the Fireshadows warband believed that their mission had been compromised, and that a trap had been set for them. After searching the room they found the king's royal servant Savione in the private bedchamber with a knife in his chest. Savione warned the charr of King Adelbern's madness with his dying breath.

You must stop him.

The king is mad with grief, and he plans to use a great magic. He will kill us all.

When Adelbern saw the legions amassing outside of the city, he despaired. We dug in and tried to withstand the siege for as long as we could. When we saw the latest wave of charr arrive, we knew our final moment had come, that our time had finally run out. His Majesty told me, 'This is no longer a siege, Savione. This will become an assault. But if force of arms fail us, force of will shall not. Where swords may fail, sorcery may succeed.'

His Majesty bears on his hip a mighty blade, a relic of now-lost Orr and its City of the Gods

He drew the sword and looked deep into its depths. The king said, 'I have long known that Magdaer had other powers—remnants of the gods themselves. We Ascalonians may be doomed, but Ascalon will live on forever!'

After warning the charr of his king's plans, Savione told the charr that they could find his king in the throne room surrounded by Royal Guard and as many soldiers as the walls could hold, preparing to unleash powerful magic from his sacred sword Magdaer. Frye made the call to abandon the mission and instead warn the Flame Imperator of King Adelbern's plan. The Imperator, however, refused to listen to Frye's warning, spitting on him and arresting the entire Fireshadows warband for failing their mission and supposedly lying to him to cover up their failure. The Imperator ordered for Frye and his warband to be bound by their claws and feet on stakes placed on the Viewing Hill from where they could watch the Flame Legion's moment of victory, shamed in the knowledge that they would never be able share in its glory. 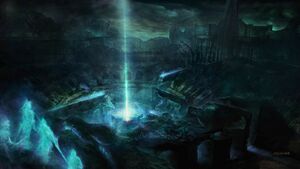 As the charr armies destroyed the walls of Ascalon City and flooded into its main square, they found the Sorcerer-King Adelbern with Magdaer in hand defiantly standing on top of the highest tower of Ascalon City. Magdaer burned with a magical flame as Adelbern screamed to his routing soldiers to stop retreating. He raised his magical blade over his head, and plunged it into the stone of the tower. A white fire shaped like a blade, was unleashed from where metal had cut stone. This was the Foefire, a spell often compared to the charr's own Searing, The Foefire consumed the Sorcerer-King and his tower. After the tower collapsed the Foefire turned into an inferno of destruction which engulfed nearly all of Ascalon in a wave of white flame. Every human consumed by the white flames died and their bodies were blasted into burning fragments, but their spirits were forever bound to the land of Ascalon, turning them into the ghosts still seen roaming around today. The charr inside of the city joined the humans in painful death, immolated in cursed flame and burnt to cinders, but those deeper into Ascalon were spared from the horrors of the Foefire.

Frye Fireburn and the rest of the Fireshadows Warband were forced to watch the events of the Foefire unfold from upon the stakes to which they were bound, and the horror of it all forever turned their fur into a snowy white. Eventually Frye managed to free himself and his warband from their bounds, and they returned to the staging grounds inside the ruins of Rin which would later develop into the Black Citadel to bring the news of the Foefire. Although most charr had a hard time believing the news, the Fireshadows brought undeniable proof in the form of their fur.