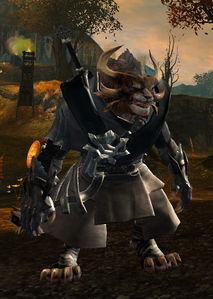 Ambassador Aximus Steelcrusher is the charr High Legions' head of diplomatic mission at Summit Peak in Warrior's Crown. He was sent to negotiate the provisions of the treaty with the humans, volunteering to be the ambassador. In the past, he served a tour of duty "years ago" on the Granite Front with Smodur the Unflinching. Ajax Anvilburn, leader of the charr Renegades, tried to frame Steelcrusher by attempting to murder Minister Duran to hinder the peace treaty.

We've got centuries of hatred to undo here, and we've got rogue elements using that hatred to undermine the peace talks. Anyone could be a threat.

You think peace can be achieved?

If the Renegades have their way, no. They're a bunch of crazed mongrels who broke away from their warbands because they think it's better to murder humans than end the insurrection.

They hate humans that much?

Every cub for centuries has been trained to hate humans. Luckily, most also learned to follow orders. If the treaty happens, they'll point that hatred elsewhere. Like at the Flame Legion.

How do you know I'm not a threat?

I don't. We just have to trust each other, rely on the security details, and make sure everyone here is legitimate about ending the insurrection.

Back off. I'm not looking for a heart-to-heart. I'm here to secure the peace. That's my mission, even if I have to wade through the blood of every Separatist and Renegade to get there.

What can you tell me about the Separatists?

They're trained killers fueled by a cause, and they don't fear death. They¨re the worst sort of enemy, because they have pockets of support within the groups of people negotiating for peace.

Enlighten me about the Renegades.

Beneath the surface of every charr is someone trained to hate and kill humans. This batch will gleefully kill their own kind to storm into Ebonhawke, kill every human, and call that the true victory.

We just have to work through it.