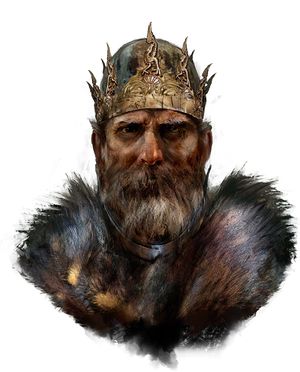 King Adelbern's crown[1] is an ancient, magical crown gifted to human royalty by the Six Human Gods. It eventually passed on to the Ascalonian line of kings, with its latest wearer being King Adelbern, until it was lost in the aftermath of the Foefire. According to a human legend, the Foefire curse can be lifted in a ritual when the rightful ruler of Ascalon from King Doric's lineage returns with the crown and one of the two flaming swords—either King Adelbern's Magdaer or Prince Rurik's Sohothin.[2][3][4][5]

Before the Exodus of the Gods, the Six Human Gods gifted human royalty with a magical crown and a pair of magical swords—Magdaer and Sohothin—which could be used in a ritual to cast a powerful spell to protect the kingdom from invasion. To safeguard the crown from falling into the wrong hands, it was designed to break into four parts so that the fragments would be hard to see if they were ever separated. However, the fragments also worked like magnets to each other, so possessing one fragment would allow a person to feel a pull towards the other fragments should the crown ever need to be reassembled.[3]

The crown passed on from king to king over the centuries until it was inherited by King Adelbern who had been elected as the latest sovereign of Ascalon. However, when the war between humans and charr was about to turn in the latter's favor as the charr breached the gates of Ascalon City in 1090 AE, Adelbern used Magdaer and the crown to cast the Foefire curse which decimated the city and the enemies and allies within its radius while raising the dead Ascalonians as vengeful ghosts to continue fighting beyond death. The crown survived the destruction of the city, however, and was later found by charr who toyed with it until they lost the fragments.

By 1327 AE, Rytlock Brimstone had located one of the crown fragments and discovered a potential way to end the Foefire curse after studying history tomes in the Durmand Priory. He tasked the Pact Commander to locate the other fragments with the piece which he had recovered so the whole crown could be used alongside Sohothin in a ritual in Barradin's Vaults. The Commander tracked down the other fragments in the Ruins of Oldgate, the Wreckage of Serenity in Deserter Flats, and Bria's Manor in Hellion Forest and brought them back to Rytlock to be reassembled. Promising to return the crown to human hands once the ghosts had been vanquished, Rytlock joined the Commander, Smodur the Unflinching and Rox as they headed down the vaults. While the ritual diminished the presence of ghosts, it did not vanquish all of them, and it opened a portal which sucked Sohothin into the Mists. Not wanting to lose the sword which was a key to the ritual, Rytlock jumped in after Sohothin.

The fate of the crown after Rytlock's return from the Mists remains unknown.