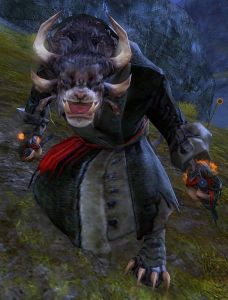 Not bad, little mice! You just earned my full attention, and it's going to hurt!

Trybulus Griefblade is an Ash Legion traitor who joined the Flame Legion. He killed his warband in cold blood and set their deaths up to look like an accident before joining the Flame Legion. The Ash Legion refer to him as a sociopath but a genius and one of the Flame Legion's best spymasters. After climbing the ranks, he led a series of spies to infiltrate the Black Citadel via murdering workers and having his men take their place. With Flame Centurion Kagaar and Flame Saboteur Ducco leading the spies, Trybulus intended to set the Blood Legion and the Iron Legion against each other via framing. When his plans were stopped by the Ash Legion, he kidnapped and tortured Fengar Cruelmane and Tribune Torga Desertgrave, killing the former when he captured Torga. After Torga's rescue he returned to his main hideout at Igni Castrum where he was tracked down and killed by a strike team led by the Legionnaire and Rytlock Brimstone.